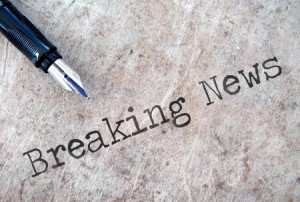 If you own or run a business, charity, club or other type of organization that needs to ‘get the word out’ about anything, you may end up writing a press release at some point to accomplish your goal.  Press releases are effective vehicles for attracting attention, making announcements and engaging your target audience.  The format is pretty basic, but that doesn’t mean writing a press release is easy.  Here are 5 tips to help make yours a success:

The beginning of any great press release starts with a great headline.  Without it, your press release isn’t likely to be read or even picked up in the first place.  The headline is the first thing anyone sees and it is the one thing that will draw them into the release.  Your headline must be engaging, to the point and accurate.  If it doesn’t pique your target audience’s curiosity in some way, they will just pass it by and move onto something else.

If you have managed to engage your reader enough for them to move from the headline to the body of the release, it doesn’t mean you’re out of the woods yet.  Attention spans are short these days, and if you don’t get straight to the point when you’re writing a press release, you may lose the reader in the first paragraph.

It’s also important to make your points in a clear and concise manner.  A press release isn’t the place to get wordy and show off how creative and artistic you are.  Shorter is usually better when it comes to writing, and writing a press release is no different.  Keep the sentences short and to the point, use statistics and numbers when possible and you’ll be on your way.

4.  Refer to Your Headline

One area where a lot of people get into trouble is straying from their headline.  Keep in mind that your press release is being read because of the headline.  Whatever you stated or promised in the headline is why that person chose to read it.  If you fail to stay on topic, you will lose the interest of the reader.

Writing a press release is just like writing anything else when it comes to grammar and spelling mistakes.  Make sure you proofread your release or have someone else proofread it so it’s flawless.  You can also give us a call and take advantage of our writing, editing and proofreading services and we’ll help tailor a press release no one can resist.