Our Take on Trump 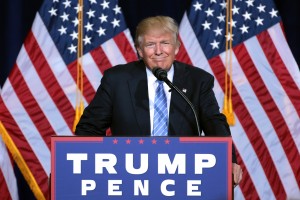 Most of the time, we leave our politics at home. But this time isn’t like most times. And because we’re all about words that’s what we’re going to talk about today, specifically the words Mr. Trump used over and over again in his campaign.

Look, his policies are his policies, and to be honest, we don’t know enough about them to comment one way or the other on their efficacy — of if he’s even going to follow through on them.

But we do know what a word can do to legitimize hatred, prejudice and ignorance. And it’s up to all of us, Americans, Canadians, Europeans, everybody, to teach our children that these words are NOT okay.

It’s not okay to insinuate that all people of a certain background are a certain way.

It’s not okay to draw subtle correlations between hard times and Jewish bankers who are making it so.

We say this especially to those of you who have young children because they’re all going to get in trouble one day for saying at least one of these things. And you have to be steadfast in telling them that it’s not okay.

And when they come back and say, “Well, the president says it,” and you feel like you have no apt response because, well, the President DID say those things, you have to tell your children that the president was wrong.

It’s not an easy thing to do because the president is supposed to be the yard stick by which everyone measures their own conduct.

We don’t have that luxury now, so it’s up to us to fill that gap.

Don’t let the words of a buffoon define what is and isn’t acceptable. We’ve seen far too often throughout history where this leads. And we certainly don’t want to see it again.