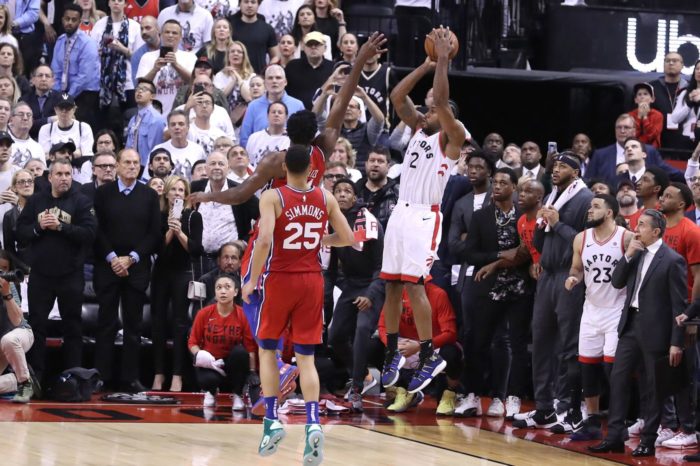 As much as we’re sports people, we’re word people first. So we jumped onto YouTube to find footage of “the shot” as described by  sportscasters around the world.
On first listen, they all sound kind of the same: men losing their minds at the ridiculousness of what was unfolding in front of their eyes.
But if you listen closely, the subtle nuances of each language come through.

If you listen closely, you’ll hear the two announcers talking over each other. This is uncommon in Korea, as the etiquette norms in the country trend towards more respect for others versus less. In fact, of all the broadcasts in the video, the Korean team was the only one where the announcers spoke over each other. Chalk it up to the moment.

This one was interesting to us because of how down the announcer sounded from the time Kawhi Leonard got the ball to the moment the shot went down. So we did a bit of digging and found that Portuguese people have a reputation of being happy when they’re sad.

We were puzzled here; not for the language but for the visuals. Instead of showing the play, they were showing the crowd outside the area. Not a choice we would’ve made. But when you’re the People’s Republic of China, you focus on the people.

In North America, we tend to refer to our athletes by their last names, but in this case, the announcer only referred to Kawhi Leonard as “Kawhi.” Perhaps he spends a lot of time calling soccer games with Brazilian players who only go by one name?

This one might be our favourite foreign language call on the video. The announcer’s gruff voice gives the clip more excitement. And we loved the way the two guys went nuts after the shot went down. These guys were having fun.

American Spanish has such a mellifluous sound and it comes through in this clip. And perhaps the best word to describe the moment came from this announcer: fantastico!

And then there was ours

The last clip in this video is from Matt Devlin at Sportsnet and he’s one of the best in the business. We love how his voice goes up about three octaves and 20 decibels when he gets excited. He’s known for that.

Getting to watch the shot over and over again.
Go, Raps, go!