Adjectives and adverbs: Objective versus subjective

Mark Twain: “When you catch an adjective, kill it. No, I don’t mean utterly, but kill most of them — then the rest will be valuable.” 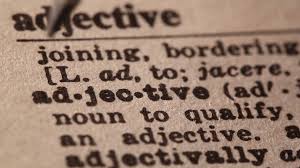 Here are a few examples:

Steve drove a red car. — “Red” is the adjective.

Think of your idea as a face and adjectives and adverbs as make-up. A little touch here and there accentuates your beauty and brings out your best qualities. But too much hides the natural brilliance and makes you look like a clown.

If you were describing Steve’s red car, you could modify red with “cherry” or “deep.” These are objective adjectives that paint a specific picture in the reader’s mind.

On the flipside, adjectives like “luscious” or “brilliant” don’t do anything for your reader because they’re subjective. What “luscious” means to you can mean something completely different to your reader. So you’re not helping them. In fact, you’re just confusing them.

You can always tell a novice writer by the way they overuse subjective adjectives and adverbs. You can almost picture them consulting a thesaurus for the perfect word they think makes the piece feel smarter.

It’s only when a writer becomes more confident in their ideas that they realize they don’t have to hide behind subjective adjectives and adverbs.

Steve drove a cherry red car. — Your reader knows what cherry red looks like. They can picture the hue of Steve’s car and you can get on with your story.

As an inexperienced writer, you’ll find yourself using subjective adjectives and adverbs without knowing it. It’s one of the more common mistakes. So as you’re writing, consider the following:

If you think you need to further describe Steve’s cherry red car, think about adding a second sentence after the initial description. “Steve drove a cherry red car. Its lusciousness was undeniable, as evidenced by how much attention it attracted.” You’ve now taken the subjective “luscious” and made it an objective fact, which you’ve then supported with proof. Your reader now understands what you mean by luscious, and they can picture people stopping to look at the car.

Metaphors and similes are comparisons for the purpose of establishing context. The difference between the two is that similes use the words “like” or “as” to draw a comparison while metaphors don’t.

Simile: Steve’s car was red like a bowl of ripe cherries.

Metaphor: Steve’s car was a cherry on wheels.

If Steve’s car was cherry red, just describe it that way and move on.

As for adverbs, the one you should ALWAYS avoid is “very.” If Steve’s car is red, saying it was very red doesn’t make it any more red.