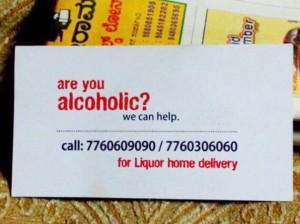 We recognize that alcohol abuse is a disease. But this post isn’t about that. This post is about a fantastic play on words that had us giggling for at least a few minutes, and stirred up that jealousy that only writers feel when they see something awesome: I love it. But I hate myself for not coming up with it first.

The best part about this piece is that it’s a simple business card. There was no mass media buy, no huge social push and no celebrity endorsement. Just ten words put together to tell a pretty funny joke and introduce a service.

And introduce it they did. From what we were able to ascertain, this card generated hundreds more calls for these guys than they were getting before the cards went out.

And yes, the under-sensitive among us have a problem with it. They think it makes light of a serious problem. They’re right. But we don’t care. Because it’s funny. And in a little bit of irony, it’s the people so bent out of shape about this who probably need to call the most.

The lesson here for all you aspiring writers is that you don’t need to outspend the competition or spend weeks devising an elaborate disruption. Here’s a simple joke with a simple call to action. 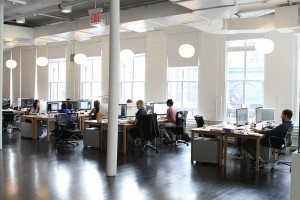 If you’ve ever been to our office, the first thing that jumps out at you is the 28-foot ceiling height. This differs sharply from our last office where the ceilings were a paltry nine feet.

Now, you might say, “Well, come on, does this really matter? You’re staring at a screen.”

Because, as human beings, we’re affected by our space even if we think we’re not. To validate this, we spoke to occupational therapist April Lebovsky.

Us: So, really, can the amount of space in a room affect creativity?

AL: Absolutely. Think about how your heart rate increases when you feel constricted, be it in a small plane, among a crowd of people or in your dreams if you have that “stuck in a coffin” nightmare. That constriction carries over to your active mind; the part that helps you create. Constricted body leads to constricted mind leads to constricted thoughts — which is the enemy of creativity.

Us: And so a large space has the opposite effect?

AL: For sure. When your mind feels like it has more space to breathe, it can take deeper breaths. And a deep-breathing mind is the one that generates the best ideas. It’s free and unencumbered.

Us: That’s all fine and good, but do you have any evidence of this?

AL: I do, actually. Last year, we studied how space affects productivity. We gave 100 test subjects in the same building the same right-brained task to complete, but we put 50 of them in tiny offices with low ceilings and no windows, and the other 50 in a large atrium. Then we got the two groups to share their ideas with the other. The atrium group did their tasks faster. Their ideas were more well-received by the tiny office group than the latter’s ideas were received. We ran the experiment four times and the results were consistent.

Us: So what advice would you give people who actually have to work in small spaces?

AL: Get out of there as much as you can. Give your mind the room it needs to stretch its arms.