The Beauty and Meaning Behind Your Handwriting

Our handwriting says a lot about us. As graphologists (people who analyze handwriting) will tell you, it can reveal thousands of character traits. So you might want to consider typing out that ransom letter to keep the anonymity true.

If you’re familiar with someone’s handwriting, you can tell exactly who wrote it without even reading the text. And that quality makes receiving handwritten cards, letters and thank-yous that much sweeter. We’re all creators of our own distinct typeface — one that varies depending on our age, how much time we have on our hands and what mood we’re in. An angry note will look different than a rushed one, which will look different than one written in a calm zen-like state.

You can immediately tell whether or not you can trust someone by looking at their handwriting. In fact, some employers use it as a way to find their perfect candidate. Because we need even more added pressure.

Big, loose and loopy strokes are distinct of someone who is confident, laid back and goes with the flow. Tiny, structured and dainty strokes are the mark of an introverted genius. Someone who struggles with legibility clearly has more important things on their mind than making their writing readable. Just look at the distinct chicken scratch on your doctor’s note.

The direction your words slant, the spacing between your letters, how you dot your I’s and cross your T’s, whether or not your letters connect and even whether your L’s loops are tight or loose makes a difference in deciphering your personality.

Ever see someone’s handwriting for the first time and think, “This person has beautiful writing, I’d love to get to know them”? Or conversely, “This guy is an absolute disaster.”

You can usually tell the gender of the writer based on how “girly” or “boyish” the writing is. Although, the rugged epitome of a man’s man that is Ernest Hemingway had pretty “girly” writing. Maybe he had a softer side deep down.

The physical act of writing is an extension of our overall mannerisms. If we’re used to being loud and animated, our writing will reflect that. If we’re mousey and quiet, our writing strokes follow suit.

There’s a beautiful quality in being the only one who writes your own specific way. Just like our fingerprints and tones of voice, our handwriting is solely ours. It’s our stamp of recognition and our seal of authenticity. All the more reason to put the phone down and write it out instead. 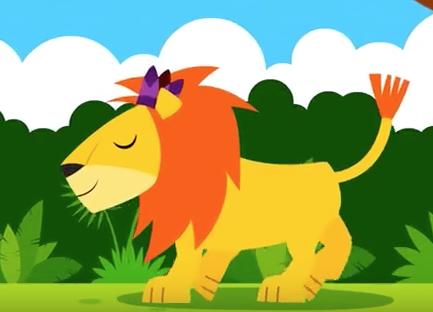 A screenshot of the Lion from the video

The other day, Dan’s two-and-a-half-year-old discovered this video on YouTube. Click the link and skip ahead to the 1:47 point and watch the Lion song. It’s less than a minute.

Do it now then come back to this post. We’ll wait.

Welcome back. Cool video, huh? Dan’s kid is going bananas for it right now. Did you notice that the song doesn’t rhyme? If so, did it bother you?

Our brains are hardwired to be pleased by predictable patterns and shy away from unpredictable chaos. It’s the basis for your body’s natural circadian rhythm that gets happy when the sun rises in the morning. It’s how you learned to identify bad food by taste or smell. And it’s why we included this sentence — because even in reading, there’s a predictable pattern called the Rule of Three, where examples, or support points, are written in groups of three.

But that’s not why it bothered us.

It bothered us because they spent all that energy writing the tune and all that money into what seems to be a robust digital marketing plan and some pretty amazing animation. But they didn’t make it rhyme. And it’s all we can notice, like an out-of-tune piano.

Fortunately, this is an easy especially since the animated characters aren’t animated enough to mouth anything specifcially. In other words, we can change what’s being said without affecting what it looks like.

The Lion is King of the Savanna,

Look at his teeth and jaw.

When the animals see his face,

They know he’s the law.

The Lion is King of the Savanna

Look at his tail and mane

When he roams in the Savannah

He further cements his reign.

Pink Fong: Feel free to use these lyrics. They’re our gift to you for giving our kids something to watch on the toilet. Seriously, we’re using your videos as currency for pooing.  Please don’t judge. 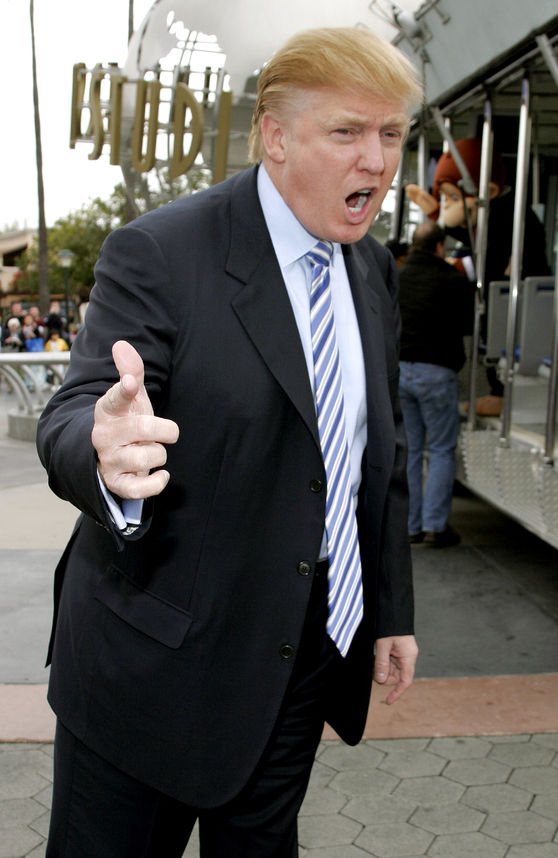 Maybe we could build a wall around his mouth?

Now, now…before you get all judgmental and “well-I’d-never-work-with-these-idiots,” just keep reading.

But man, we love his complete lack of shame.

It’s fascinating to see someone so utterly uninterested in what anybody thinks about him that he could essentially shut off his filter and say/write/do whatever pops into his head.

Back in 2012, we predicted that Twitter would be gone by 2015. At the rate Twitter’s growing (or not growing), it looks like we were about two years off. And thank god. Because following @realDonaldTrump has been a serious highlight of the past half-year.

Here, in no particular order, are some of our favourites:

“Jeb Bush just got contact lenses and got rid of the glasses. He wants to look cool, but it’s far too late. 1% in Nevada!”

Why poke holes in an opponent’s platform when you can call him four-eyes? It’s just so much easier, and (sadly) more effective.

It’s Friday. How many bald eagles did wind turbines kill today? They are an environmental & aesthetic disaster.

The answer is probably zero. Bald eagles are actually quite intuitive birds that can recognize danger. It’s one of the reasons they’re the lions of the sky, and why they were chosen as a symbol of American prowess. But kudos for preying on (a) blind ignorance and (b) blind patriotism to keep the world from moving towards a more responsible and far cheaper energy source.

@ariannahuff is unattractive both inside and out. I fully understand why her former husband left her for a man- he made a good decision.

He could have pandered to his base and called out Ms. Huffington’s ex’s lewd and un-Christian lifestyle, but the Donald doesn’t pander to anyone. So instead he said that her ugliness turned her husband gay.

I refuse to call Megyn Kelly a bimbo, because that would not be politically correct. Instead I will only call her a lightweight reporter!

There’s a great Monty Python skit called “Election Night Special” (ironically) where a guy breaks in every so often to say, “Can I just say this is the first/second/third time I’ve been on television,” and the host replies with, “Sorry, there isn’t time.” This is like that, but way better because it’s actually happening.

I wonder if Apple is upset with me for hounding them to produce a large screen iPhone. I hear they will be doing it soon—long overdue.

Ok, we said there was no particular order, but this one’s our favourite. Taking credit for something you had absolutely nothing to do with, and actually believing you had something to do with it, is special. In fact, we’re going to start doing that ourselves. In the next post, we’ll tell you about the time Dan invented the phrase, “It’s All Good.”

When you’re advertising to people, you need to be approachable. Think of how you’d talk to someone if you knocked on their door. You have a very short period of valuable time in which to win them over. And you’re in a position where they can slam the door in your face at any given moment — if they open the door at all.

With advertising and marketing communication, you need to tell them what to do without blatantly telling them what to do. And there are much better ways of saying CLICK HERE NOW! or SIGN UP TODAY! without being so invasive. Let’s make it clear that the above examples are NOT the way to do it.

Here are a few things to keep in mind when crafting your call to action.

Watch out for exclamation marks.

As a general rule of writing, we try to limit the use of exclamation marks to comic books, text messages and maybe sometimes occasionally sprinkled into body copy. Never in headlines. Ever. Just think of those in-your-face infomercials where you’re being yelled at. It’s too much drama.

Your call to action usually comes at the end of your ad (although sometimes it’s the headline itself). So you want to leave the reader on a positive note. You can have the best headline in the world, and your BUY NOW! can make all your hard work disappear. Tell them nicely. There’s no need to scream in their face.

All of these can be placed on a clickable button to take your reader to your website. They’ve read your offer; they’ve heard your pitch. The next move is theirs. If you skip their turn and go again, you’re talking at them instead of to them. SLAM! You want to show them you value their opinion and respect them enough to let them make the next move on their own. That’ll help win them over (if done correctly, of course). So politely guide them in the direction you want them to go instead of aggressively pushing them.

Things are as transparent as they’ve ever been these days. If you tell someone your product is the best in the world, they’re one quick Google search away from seeing that it’s not — along with all the reviews of it by satisfied and dissatisfied customers. So be careful what you say, because the truth comes out one way or another. Plus, modesty has always been one way to score points with people. Be humble. Be real. And most of all, be polite.