Your vs. You’re…One Trick to Guarantee You Never Get It Wrong Again! 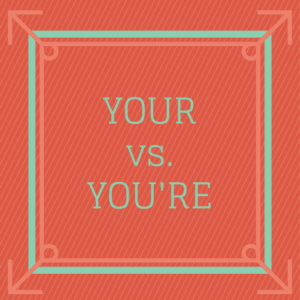 Occasionally mixing up the odd words that happen to sound similar is understandable. If you do a lot of writing, it may even be expected. However, this your and you’re confusion has reached epidemic proportions and it must be stopped.

They do sound almost the same when spoken, but their meanings are not the same at all, so when they are used incorrectly in writing the meaning of the sentence is thrown way out of whack. Luckily, there’s an easy way to fix it that you can use every time you encounter this issue.

That subhead doesn’t make it seem very simple, but the secret literally consists of asking yourself one question each time you must use a your or a you’re. Is it in the form of a possessive adjective or a contraction? To simplify further, could you insert “you are” in place of it or not?

If you can use “you are” then you can combine the two words into one, making you’re.  This is called a contraction. If you can’t insert “you are” then the situation likely refers to ownership of something.

Here is an example:

(You’re looking lovely today on the day before your birthday. I can’t believe you’re going to be 30 already! You’re definitely going to dazzle everyone tonight with your new dress.)

If you are one of the multitudes who commonly misuse these two words, be patient in your recovery. Try not to get ahead of yourself, read through the sentences a couple of times when your and you’re are in play, and before long it will become second nature.

The your vs. you’re issue may not seem like that big a deal to a lot of people, but it does create a perception of you if you use them incorrectly in school, and of your business if you use them wrong professionally. It leads people to believe that you are an amateur, you’re lazy, or you aren’t concerned with accuracy and getting things right. Obviously, none of these opinions will do, so start your transformation today!