In a short 15 years, though, all the hard-and-fast rules we were taught in what used to be aptly called “grammar school”  have been either loosened to the point of being optional or flat-out cast aside as conventions from the old world.

Is this a bad thing? That depends on who you ask.

Writing for a Modern Audience

Every form of written communication has been affected by this sweeping lexicographical change.

Traditionalists see it as the erosion of the proper and another step towards global anarchy. Ten years ago, when this revolution was just getting off the ground, the BBC put out a warning that this trend towards the “slangification” of language would have dire consequences. They said it should be nipped in the bud immediately.

On the other hand, more progressive pundits see it as a necessary progression, and one that should be embraced. Like the way adults in the ’60s had to embrace the sexualization of music, and accept the fact that “Rock Around The Clock” and “Mr. Postman” weren’t resonating.

For the most part, it looks like the traditionalists are acquiescing. They’re accepting the LOLs, ROFLs, OMGs and IDKs. They’re okay with alternate spellings of words like god (gawd). They haven’t yet accepted this new lingo into the upper echelons of the business world — resumes, for example, are still by and large written formally — but who knows if that convention will last into the 2020s.

One thing we can say for certain is that this revolution is having a two-pronged effect on professional wordsmiths. One is positive and exciting, the other is frightening and somewhat debilitating.

The New Rules of Writing: Yay AND Nay

On the plus side, the acceptance of these new non-conventions create possibilities we in the writing community had never really had. Sure, we could make a statement with grammatically incorrect copy like this genius vintage tagline from Apple. 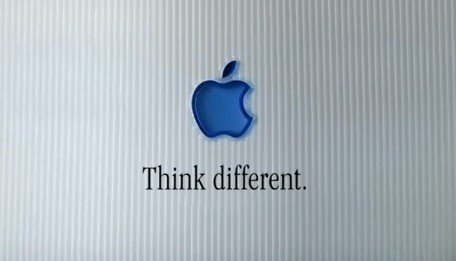 But you really need a progressive client like Apple to get on board.

On the flipside, it’s a lot more difficult to appear sincere. Go too far with the lingo and you’re trying too hard. Don’t go far enough and you’re not relatable.

The key to good writing, as it’s always been, is to stay true to yourself. And the best way to do that is to read what you write aloud. If it feels awkward coming out of your mouth, it’ll be 10x more awkward going in through people’s eyes, ears and heart. Find your sweet spot that holds the line between “This is my cheeseburger” and “Haz Cheezeburgur,” and stick to it. You don’t have to speak social slang to be noticed by people who do, but you should have confidence in the voice you own.