We Love When This Happens 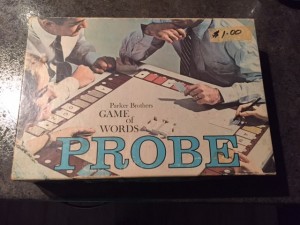 First of all, any game that requires a tie to play is our kind of game (we’re classy like that). Then “Game of Words” sold us because, well, y’know….

Coming across a great use of words is such a treat. Most recently, it happened at a cottage in the Bruce Peninsula when we pulled this bad boy out to try.

You think of a word, spell it out in cards and place them face down in front of you. If you go first, you might say “any Rs?” Anyone else who has an R has to reveal it. Players with more than one R in their words can choose which of their Rs to reveal based on their point values. Each card has a point value, which all go to you.

Your turn ends when you guess a letter that no one has. Then the next person goes.

What’s cool about the game is that it’s not a race to guess the word. Instead it’s a race for points. So even if your word is fully revealed, you still get to guess letters and collect points.

There are cool features like blank cards to bluff your opponents and activity cards that let you do things like triple your point value and get opponents to do things like keep score. As you can imagine, we created a few of our own activity cards. We had one dude play a round in a Scottish accent. It was very poor. And very funny.

Probe’s retail price in 1972 was six bucks. Good deal for our hosts.