The Best Word Games to Get Competitive Over 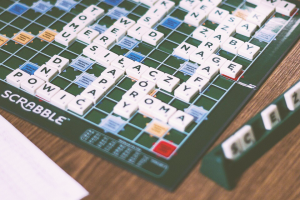 Word games are the best because anyone can play them. You use words all day, every day. Even if you’re not speaking or writing, your thoughts are made of words.

You know how to use your words. Here are a few ways to win with them:

Duh — the obvious first choice in word games. This tried-and-true classic has been around since the late 1930s. Make the best of the seven letters you get and build onto words already spelled by your opponents. The more you play, the more two-letter words you’ll learn (and never use outside a Scrabble Game).

Alternate rule suggestion: Make tile trading legal. No one wants to be stuck holding AAEIOOU or FJKRLBX. And quite frankly, it slows the game down for everyone. So if two players want to trade, just let ’em. It’ll get you all that much closer to an open triple-word.

Test your ability to colour outside the lines, so to speak. In Taboo, you have to describe something without using most commonly used words to describe it. For example, if the word you’re describing is pirate, you can’t use the words treasure, hook, parrot, skull or island. So you’d have to get creative and say something like, “Jack Sparrow is one of these” or “the term for illegally downloading movies.”

Alternate rule suggestion: Make inside references illegal. If your partner is a good friend, you’re at a serious advantage. If the word was Godfather, you could say “You fooled around with Sheldon Finklestein while this movie was on in the background” — and that’s just not fair (and not right because…Sheldon Finklestein? Really?).

Perhaps not as popular or well-known as the others, Mad Gab is a word game to exercise your phonetic capabilities. Phrases your partner tries to guess are spelled out as completely different words that sound like your given phrase. Huh? Here’s an example to demonstrate: “He’s a sly fox” would be written as “Ease Ace Life Ox.” Say the latter really fast and moulded together, and it’ll sound like the former. So here you need to ditch logic and let instincts kick in to sound it all out. It’s essentially like learning a new language — which makes you respect the foreign exchange students you went to high school with that much more.

Alternate rule suggestion: Limit the number of repeats. The more the reader says the phrase, the easier it becomes. Give them two shots, then shut them down.

Who doesn’t love a nerve-wracking battle against a ticking clock? Not to mention a bunch of competitive opponents. Using a grid of 4 x 4 dice (with letters instead of numbers), you have to think of as many words as you can using the letters in the grid — all before the designated three minutes run out. Playing Boggle is a great way to keep the gears in the ol’ brain turning and stay sharp between the ears.

Alternate rule suggestion: Whoever loses has to clean. And they can’t lose any of the letter cubes. Good luck with that.

While not a classic or typical word game, per se, we included Cards Against Humanity because it is, technically, word-based. Not to mention, totally amaze-balls. One person reads out the phrase on a black card, and the rest of the people answer with one of their white cards that best goes with that phrase. Offensive. Inappropriate. Glorious.