The Best Advertiser on Earth

Volkswagen comes close. So does Nike. MasterCard hit a few out of the park. But from where we sit, nobody does it better than The Economist.

If you’ve never heard of The Economist, it’s a British current events magazine of the highest quality. It’s so eloquently written, so well-researched, so thorough in its reporting and so thoughtful in the stances it takes.

But it’s not for everyone because it assumes an educated reader. It doesn’t dumb anything down and it doesn’t pander.

And you get that from every Economist ad you see.

No rebranding necessary. Ever.

Think of a brand, any brand, and you can probably think of its iterations. Not so with The Economist. From day one, they’ve never changed their look, tone or promise. And they never shied away from pulling people in by pushing others away. Their thinking: if you don’t get it, we don’t want you.

It’s a dangerous game to be sure — acquisition by ostracization — but they have two things going for them: firstly, their magazine delivers on its promise every issue; and secondly, their ads are just so damn compelling.

As copywriters, we salivate every time we hear of a new Economist ad, and they never disappoint.

In fact, the only disappointing part of the entire experience is after we read them the first time because the first time’s always the best.

We could go on and on, or we could just show you our top 10 favourite Economist ads. 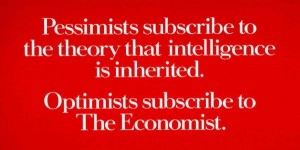 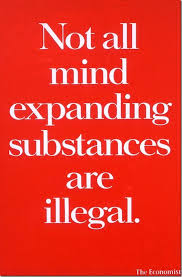