Save the Writing; Better Say it Aloud 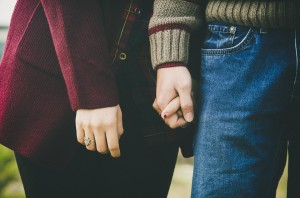 As much as we love to advocate for the written word, there are some things you simply wouldn’t want to see in an email, text message or on social media before hearing it directly.

Seeing your best friend’s “she said yes” post on Facebook or Instagram before they excitedly call you on the phone to tell you first takes all the magic out of the experience, doesn’t it? That puts you on the same level of importance as the masses. Thanks, best friend, I thought we were closer than that.

Sharing words with someone in person immediately increases their value (both the words and the person). So give your words the significance they deserve. Otherwise, you could very well come off as offensive, inconsiderate or rude.

So, in the spirit of preserving the little human interaction we have left in the world, try to keep the following things for face to face. Or, at the very least, over the phone.

The first-ever “I love you.”

It’s terrifying enough to get the courage to do this. It is, after all, one of the scariest things to say for the first time. And after all that build-up, you’ll probably want to see the receiver’s reaction in front of your very eyes (assuming it goes well). Plus you’ll want to be there in the flesh for whatever comes next. Wink, wink.

Ending a relationship, whether personal or professional, is never an easy thing to do. Imagine being broken up with over a text message. Or being fired over an email. What does that say? “I couldn’t be bothered to waste another minute of my time with you.” And while you’re leaving them for a reason, no one deserves that kind of disrespect. Be a good sport about it and look them in the eyes while you break their heart.

Quite the milestone. And there will most definitely be more to be discussed in that conversation. Seeing that kind of announcement in a Facebook message would sound like a joke. Enough said about this one.

“Will you marry me?”

Another no-brainer. Texting someone, “Will you marry me?” would probably be followed by “Really?” or “Are you serious?” Don’t start your life together with an argument. There will be plenty of those to come.

Grandma, Uncle Joe, whoever it may be; someone’s passing should be communicated vocally. Unless, of course, it’s under extenuating circumstances. 1) It’s a form of respect to all those affected. 2) It puts you in direct contact with people you’d want to be around anyway.

If we haven’t made it clear by now: put the pen, phone, laptop or whatever it is down and knock on their door instead.