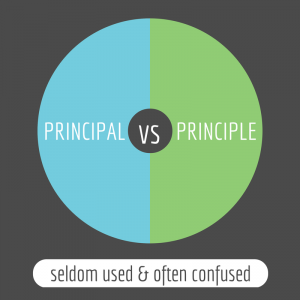 For this installment of our ‘vs.’ post, we thought principal and principle could use some clearing up. Many of you rarely have an opportunity to use either one in your writing, so mix-ups are a common occurrence.

Of course, ignorance is never an excuse for misusing your homonyms, so even though the mistakes may be completely innocuous, it’s time to learn the right way.

Most of us (some more than others) are familiar with the word principal as a person in a position of authority. The school principal is our earliest connection to the word and it stays with us for the rest of our lives.

However, principal has other meanings, too. It is both a noun and an adjective, and is used regularly in financial and legal industries. The original amount of a loan that you have to repay is known as the principal, and someone acting alone to commit a crime or being the main perpetrator is often called the principal. You can also use principal when describing the starring actor in a play or movie.

When used as an adjective, you can substitute principal for primary or leading. As an example, “The principal cause of his heart problem was years of heavy smoking,” or to make things interesting, “The principal reason that Billy was sent to the principal’s office so often was because he enjoyed starting fights in the school yard.”

Using principle is a little less complicated, but it’s still important to pay attention so you can use it correctly. Principle is only used as a noun, and refers to a standard, ideal or rule that may be moral, legal, natural or something else.

Some examples of the word principle in actions are, “This leader is a man of principle.”  “Understanding the principles of proper grammar is crucial to effective writing.”

Tips to Help You Remember

One simple tip that a lot of people use to try to remember the difference between these two words is to focus on the last three letters in each word. The word princiPAL contains the word pal, which refers to a friend or person. Since only people can be pals and principal refers to people, use it when a person is involved.

PrinciPLE has no pal at the end, so you know to use it when dealing with truths, rules and standards. This tip can get tricky when you’re referring to princiPAL as the non-interest part of a loan or your princiPAL residence, because they aren’t friends or people, but if you can remember that princiPLE deals only with rules, standards and truths, you should be fine. And if not, check back here for clarification.