Hyphen vs. Dash — Getting Your Short Lines Straight

Those little horizontal lines cause more headaches than any other character. So we thought it might be easier to understand the “hyphen vs. dash” deal if it was broken down with examples of how to use them.

* Full disclosure: We verified our information with the Cambridge Dictionary and the Chicago Manual of Style.

Its main purpose is to combine two words into one concept.

“Check” and “in” are two words that convey two different concepts (well, more than two if you factor in their multiple meanings). But put them together with a hyphen (“check-in”) and it’s an entirely new concept made up of the two words. Hyphens aren’t limited to two-word combinations, either. Consider concepts like “merry-go-round,” “up-to-date,” “mother-in-law” and “over-the-counter.”

A sequence of words requires a hyphen when they combine to form a singular concept. Let’s look at “that shelf goes over the counter: vs “I need some over-the-counter medicine.”

In the first example, the three words are representing three separate concepts: over (above), the (a specific entity) and counter (a flat surface). The second example conveys a singular concept (medication that doesn’t require a prescription).

To know if a sequence of words requires hyphens, ask yourself if the combination forms a particular part of speech (almost always a noun or adjective). If, in its context, the words in the combination serve different grammatical functions, then no hyphen is required.

Interestingly, some words that start out as hyphenated compounds lose their hyphens over time. This usually happens when champions of the lexicon deem the concept ubiquitous enough to no longer require a hyphen. Two that come to mind are bumblebee (which used to be bumble-bee but became one word with no hyphen) and ice cream (which used to be ice-cream but became two words with no hyphen).

But that’s not all. Two other common uses of the hyphen exist. One is to split two spelled out numbers (forty-six). The other is to split multisyllabic words at the end of a line of text (your word processor probably does that automatically).

The subhead for this section is actually a bit misleading because English has given us two separate dashes: the Em dash and the En dash. En dashes are the shorter of the two horizontal lines, but still about 50% longer than a hyphen. Em dashes are twice as long as En dashes. Considered another way, the en dash is the length of an “n” while the em dash is the length of an “m.”

Let’s look at the usage differences between the two.

Officially, the En dash has three places in written English:
• between spans or ranges like 400˚F–425˚F, 3:30–3:45, 7–9 inches and $50K–$75K
• after prefixes or before suffixes attached to an unhyphenated compound, like a post–Gulf War plan or a Los Angeles–based chain of taco stands
• between two locations or written-out time periods, like the Toronto–Montreal train or a May–September romance

The Em dash has four official uses in written English:

“The best jokes involve two guys walking into a bar, a knock on the door, members of the clergy on an airp—hey look…a chicken in running shoes.”

“I wound up sitting next to this super cute single doctor on an eight-hour flight, and—because it’s me—I forgot to put on deodorant that morning.”

“I respect your valuation; I know your market and I believe in you — I’m in.”

* If that happens to you, we should talk about your pitch deck for subsequent rounds of investment.

As the technical alternative to the bullet point when you: 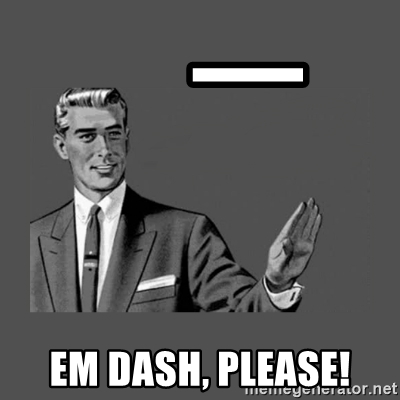 Having a hyphen vs. dash dilemma?

Feel free to reach out to us at info@reword.ca. We’ll set you straight.