How to Write a Speech for Someone Else 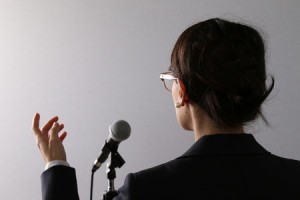 You’re a wordsmith, a whiz with words, a connoisseur of content, a prodigy of prose — you get the idea. So in light of that, your non-wordsmith colleagues come to you to write their speech. Here are some tips on how to do it so your colleagues command the attention of the room with your carefully crafted wording.

Write in a tone appropriate for the occasion.

If you’re giving a eulogy, you may want to steer clear of the jokes. If you’re presenting to a room of potential investors, you’re going to want to sound professional and successful (so they’re more inclined to invest in you). It would help to know the speaker in whatever capacity. If you’re just meeting them, sit down together and have a chat to get an idea of the way they speak, the words they use and their overall air. That’ll make it easier to write a speech that is uniquely theirs.

As you’re writing said speech, go over every sentence as you go and say it out loud. You want to ensure it flows like conversation. Make bullet points on the given topics and record yourself discussing them as if you were talking to your friends (this is to make it sound real, simple and casual). Then write out the recording verbatim if you have to. This is good practice, especially if you’re new to writing speeches.

Listening to someone give a speech that was obviously written by someone else is the ideal scene for dozing off. That’s not the reaction you’re going for, so make sure it sounds natural. You want to have a conversation with your audience — not put them to sleep with stiff and rigid wording. They may as well read the PowerPoint and ignore you altogether. If there is no supplementary PowerPoint, that leaves all the weight to perform on your words. So make sure you take extra care to choose all the right ones.

Go with the flow.

Remember, this needs to sound like they’re not reading queue cards (even though they likely are). Accommodate for natural pauses and expressions. If there needs to be a sneer or chuckle for the sake of effect, add it in. Every word should sound genuine, as if that person was talking to you from the head of their dinner table.

Contrary to popular belief, pauses are good! They give the speaker a chance to catch their breath for a moment; they let the audience absorb what was just said; and they reinforce whatever was just said because it makes it sound important enough to pause after. Indicate when to take a pause in the written speech. [short pause] That way you don’t run the risk of them doing it at the wrong time. Mapping out their speech in detail puts more control in your hands — which is where it should be.

Have them review it.

When you’ve written and re-written your speech, send it to the speaker and have them look it over. They can make changes based on what appeals more to them and in doing so show you how well you’ve captured their essence (or haven’t). Then you can make it even better and send it off for the world to hear. Ideally, they’ll memorize it and sound exactly how you envisioned. Unfortunately, ideal conditions aren’t common; the final delivery is on them. And at that point it’s out of your control. Fingers crossed.