Clever copywriter or too clever by half? 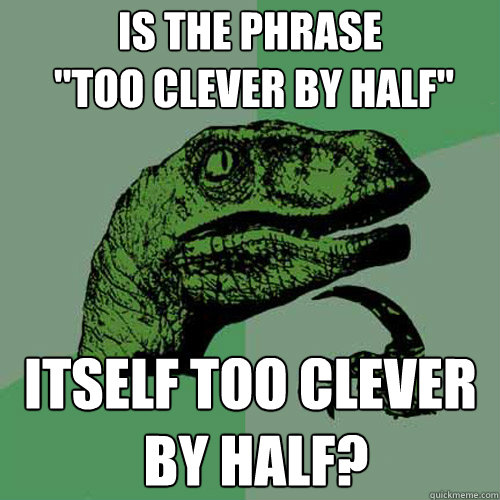 We used the phrase “too clever by half” the other day in a presentation. It’s one of our favourites.

The wiktionary defines it as “shrewd but flawed by overthinking or excessive complexity, with a resulting tendency to be unreliable or unsuccessful.” It’s often what happens when a copywriter writes for themselves and not for the client.

Thing is, whether you’re a copywriter or not, it’s sometimes hard to tell when you’re being too clever by half. And why wouldn’t it be? What you’ve written makes perfect sense to you. You wouldn’t have written it otherwise. And it certainly wouldn’t make it through the self-editing process.

And this is why we believe in pairing copywriters and editors.

An editor’s work with a copywriter is a bit different than it is with a novelist or graduate student because the audience is different one significant way: the reader doesn’t want to be reading. They have to be compelled. The audience has neither the time nor the inclination to figure out what the writer’s really saying. They’ll just move on.

And so in addition to looking for mistakes and such, a big part of an editor’s job is to call out the over-thoughts and complexities. And these are the most common too-clever-by-half examples our writers try (often unsuccessfully) to defend:

Forty years ago when popular culture was defined by three TV networks and five movie studios, celebrities were truly universal. Everyone knew Elvis, Sinatra and Monroe, and so if a copywriter referenced them in a piece, the reader would get it. It’s a bit different today. You can’t assume everyone will know who Kanye West is. So even if you nailed a headline: Re:word Copywriting: More disruptive than Kanye at the VMAs, if people don’t know what you’re talking about, they’re not going to look it up ¾ although they should…it’s quite something.

B2C (business to consumer) copywriters generally have to be checked on this more frequently that B2B (business to business) copywriters because the average person reads at a Grade 6 level. And that means three things: they don’t know a lot of complicated words, they appreciate simple words and simple thoughts, and they’ll quit if something’s too hard.

It’s easy for a copywriter to fall in love with a word like “zenith” or “facilitate.” But readers prefer “top” and “help.” In the B2B space (depending on the audience), you can get away with being a bit more high-brow. But not too much more. Remember, the reader is still a person with limited time. Be credible and professional, but don’t show off with big words.

A useful arrow in a copywriter’s quiver is a word or phrase they can create. Two that come to mind are “ring around the collar” and “halitosis.”

On the flip side, in 1921, the term “halitosis” was created by Listerine, combining “halitus” (the Latin word for breath) with the scary medical suffix “osis” ¾ et voila, a condition only Listerine can cure. But what if they had named it “dragon breath” or “hot garbage mouth?” Would people have paid attention?

The best way to avoid being too clever by half

Remove yourself and your biases. Have a second set of eyes review your writing. And if you can, have a professional editor look at it. They’re trained to (a) spot those too-clever-by-halves and (b) guide you towards a more universal alternative.

Your readers will thank you.