We use it all the time and, until this week, had nothing negative to say about it.

Then we stumbled upon this while researching a white paper we were writing. 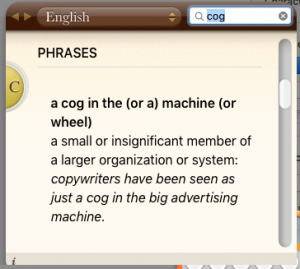 Yes, they’re using the word correctly, but could they not have used another example? You know, one that doesn’t put off their key demographic (the creative class) or flat-out lie about them?

Here’s the deal, Apple: Copywriters aren’t a cog in the big advertising machine. We’re the fuel that makes it work. We’re the ones who take advertising from art to persuasion. And you should know that better than anyone because great copywriters made you what you are. The famous “1984” Superbowl commercial? That was the work of copywriter Steve Hayden. I’m a Mac and I’m a PC? Barton Corley and Jason Sperling.

These are the people who turned your product into a brand and your brand into a juggernaut — and you repay them by insinuating they’re mere cogs?

But because we still love you, Apple, rather than make a big deal out of this, we’re going to help you with three alts for this dictionary entry:

Coffee cup makers have been seen as just a cog in the Starbucks machine.

Position-based coaches (O-Line, D-Line, etc.) have been seen as an important cog in the success of a football team.

Bulldozer operators are just another cog on the job site. But without them, nothing can begin.*

*PS: This example was inspired by a new client. Stay tuned for the announcement.