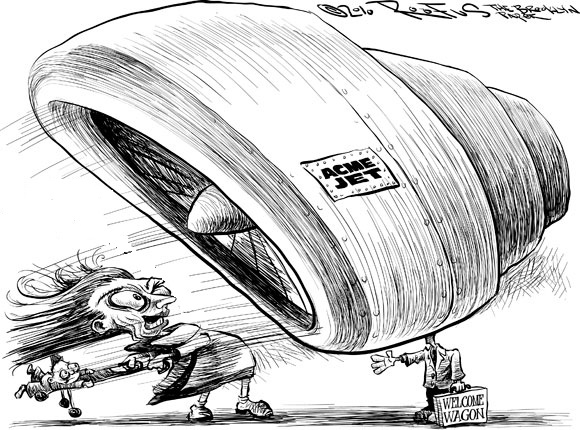 When copywriting gets really fun

Obviously none of this can happen without thorough research. And what better way to do it than to get a private tour of the runways and the towers? Yep, we got to go into the air traffic control tower and watch the magic happen. A few observations from there:

As part of our copywriting research, we also sat down with a real-life audiologist who broke down the science of airplane noise. One of the more eye-opening takeaways was how much louder a plane is when its flaps are down. And, of course, the flaps are down when it’s closest to the ground so the noise is that much more pronounced.

But the most interesting thing we learned copywriting for this project was the flight routes in and out of the airport.

See, when a plane is coming to Toronto from the eastern United States (this makes up the majority of landings at Pearson), it comes in over Lake Ontario, then travels east away from the airport, makes a 270˚ turn and then takes a straight line in. The act of turning a plane does two things to increase noise.

First, because the plane isn’t straight, the noise from the wind friction is much more pronounced.

Second, because it takes more power to turn the plane, the engine is louder. But here’s the unfortunate part: the area of town underneath where the turn occurs happens to be one of Toronto’s poshest neighbourhoods. And when you put down $2 million on a house, you don’t expect to be bombarded with engine noise 19 hours a day. So, ironically, most of the noise complaints come from there, about 20 kilometres from the airport. Very few come from the area surrounding the airport, presumably because if you live near the airport, you kind of expect the noise.

And then, we wrote.

The project took about two months to complete, with a lot of back and forth from the team at the GTAA, the scientists, the airlines and, of course, our internal team. It had to be on point and accurate, but also accessible for the average person to understand so when the GTAA team directed them to the site, they would be satisfied with the answers they found.

The final product is fantastic

The website launched last month, we couldn’t be prouder of the work, and everyone knows more about where noise comes from.