A most versatile two-letter word.

It can be a greeting (Yo, guy!), an expression of excitement (Yo, that’s dope!), a shortening of “your” for effect (Yo mama), a request for a moment to formulate your thoughts (like these dudes do) and, of course, one half of the most frustrating toys ever invented. Seriously, do you know someone who can rock the cradle? We don’t.

But because we spend a lot (a la-hawt) of time on the Internet, we found what’s probably our favourite “yo” in the world, and it’s in Ulyanovsk, Russia, a city about halfway between Moscow and the Kazakhstani border.

Yo (written as “ë”) is the 7th letter of the Cyrillic alphabet. As a piece of information, this isn’t terribly exciting. But what made us smile was finding out that there’s a monument to the letter in Ulyanovsk, home of Nikolai Karamzin who wrote the first complete history of Russia and was responsible for the creation of this letter in the late 18th century. 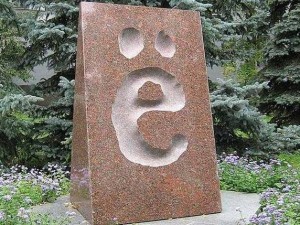 This got us thinking about what letters in our alphabet deserve a monument. Here are our top 5:

Y — Sometimes a vowel. Sometimes not. That’s some hardcore super power right there.

C — Sure, there’s the K and S properties of the letter, which is interesting. But C’s the combo king of our alphabet. “Cr,” “Cl,” “-ck,” “–ch.” If you get a C playing scrabble, start looking for combos. Yo’ options open right up.

K — Military people probably thought they were so smart when they came up with “ten-four,” a two-syllable sound that says, “I hear what you’re saying and I acknowledge what you’re saying.” Then K went ahead and did it in one syllable.

X — It can be 100 percent right (as in X marks the spot) or 100 percent wrong (as in an X next to an incorrect answer on an exam). Put three of them together and they can be 100% right and wrong at the same time.