You too can create a social media holiday 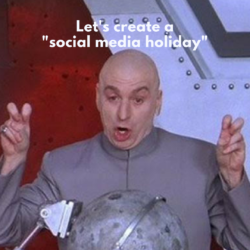 When marketing managers come to us for copywriting, we like to give them ideas that jump off the page instead of simply words that live on it. Creating a social media holiday would most definitely qualify. We can’t say we’ve managed to create one yet that stuck, but by-George we’re not going to stop trying because how cool would that be?

Why create a social media holiday?

Why not? There’s never a bad reason to celebrate, right? That’s one answer. The other answer is a crazy amount of brand awareness if you do it right.

Let’s say you head up a small marketing team at a credit union and you need interesting content for your social channels and blogs. The reality is that there’s only so much excitement you can whip up about credit unions. And if you had the time to blue-sky stuff, maybe you could come up with some more. But between budget meetings, chit-chats with business leads and preparing to present the results of your last PPC campaign, there’s no time for that.

Enter the social media holiday. Something like #NationalCreditUnionDay. Now you’re inviting people around the globe to talk about credit unions. And you can lead the charge with a few pieces of lead-up content to get people talking.

“Hug a Credit Union ’cause they’re not a bank.”

We could go on.

But more importantly, other people could go on too. And on and on and on, giving you tons of content to play with on your holiday and beyond.

Social media holidays are all about the stories.

Every traditional holiday has a great narrative, from the three wise men to the eight days of light. (ed. note: that would be Christmas and Hanukkah). Thing is, for those holidays, you kinda have to believe. But with your social media holiday, you can fact yourself into relevance. Here’s how:

In the case of our Credit Union holiday, the first North American credit union was established on January 23rd, 1901. Et voila, we have our date. We dug a bit more to find out that not only was that credit union established in Canada (the Caisse Populaire de Lévis in Quebec), but it was started with 10 cents. Now we have a date AND a symbol for our holiday ¾ the noble dime. And we have more directions to go with our content: what can you do with a dime, the dime that changed the world, where the word “dime” comes from.

Of course, to amplify our holiday, we’re going to need more than a date and some interesting content. We’ll need a brand with some clout to jump on the bandwagon ¾ which is to say we have to give that brand a reason to jump on and share the holiday with their followers.

The world’s a bit depressing these days. And it’s getting cold. And January sucks. So if our credit union can be the reason someone out there smiles on January 23rd, learns a bit of Canadian history and maybe makes it on to the credit union website for a top ten list of credit union wins, our marketing manager’s done their job ¾ and probably had a lot more fun doing it.

**Addendum:  We’ve just been informed that there already is an International Credit Union Day on the third Thursday of October. But January 23rd works WAY better.