You Can’t Blame It All on Auto Correct…It’s Time to Take Responsibility! 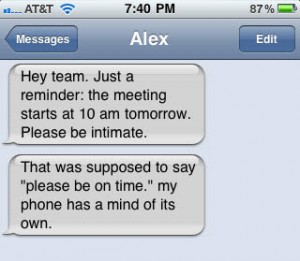 These days, you’d be hard-pressed to find anyone who hasn’t been a victim of the autocorrect feature on their mobile device at least once. That thing seems to have a mind of its own. It often creates words that aren’t even words, or corrects your word to something that has no place in the sentence you’re trying to write.

The results can be embarrassing, unsettling or even downright scandalous. However, most of the time autocorrect mishaps just make it look like you are a poor speller or don’t know which word to use in a particular grammatical situation.

It’s becoming easier and easier to lay the blame at the feet of that stinking autocorrect, but the time has come for you to stop blaming autocorrect and take responsibility for your own writing.

Exactly how instant do you need your instant messaging to be? Most people look as if they are in a desperate race and their life depends on replying to a message as quickly as possible. Or they will receive some sort of cash prize if they can get their own message out and hit send within a certain timeframe.

Let’s try to keep things in perspective. I know many younger people never had to live through those awful days when there was no instant messaging or email, but it won’t kill you to slow down a little to avoid any autocorrect misadventures.

Give It a Once-Over

Quickly reading over what you’ve written before you send it and making the necessary corrections is another step you can take to prevent problems. Most messages aren’t that long and the few seconds it takes to read it over shouldn’t take too much time out of your day.

Right and Wrong at the Same Time

Reading your message over will also help you eliminate those mistakes that aren’t misspelled, but are used in the wrong context. If instead of of, bit instead of but, an instead of and — you get the picture.

In most cases, an autocorrect mishap won’t have any negative side effects at all. Your miscue may even make the rounds in social media, as a fun joke for people to laugh at.

However, if you start using your phone to communicate with clients, colleagues or prospective employers, your mistakes will only make you look lazy. And there’s nothing funny about that!