PART 1: Breaking the Rules of English for Effect

Marketing and advertising should feature the most engaging writing, since its purpose is to drive behaviour.

Yet, so much of the writing we see in these materials isn’t engaging at all.

The topics themselves aren’t necessarily boring, but the messages are too often boringly communicated. This happens when the people behind the messages (the writers themselves, their creative directors, the business teams who evaluate what comes out of the creative department and the brand managers who approve what eventually gets published) get bogged down in process and politics instead of getting fired up to create content that stops people, makes them pay attention and gets them reading.1

The stakeholders mentioned above all legitimately want what’s best for every project. And multiple opportunities exist throughout the content creation process to turn just another document, just another ad or just another promotion into something worth talking about.2

This paper will look at one opportunity for better copy: breaking the rules to engage readers.

It will highlight famous examples of linguistic transgressions that paid off. It will break down the function and importance of the rules and how to strategically defy them to strengthen copy. And it will demonstrate that “incorrect” language can, in fact, lead to better writing if it’s carefully crafted and targeted.3

Most importantly, it will give you thought starters to bring into a brainstorm and help set higher expectations for your creative teams.

So, why break the rules at all?

The short answer? Formal, stuffy, rule-following writing is less engaging than casual, fun, conversational writing. And to sell, you have to engage, so why not make that writing more like a conversation?4

Part of the reason playing with grammar works is because it’s unexpected and strange. Estimates say the human mind is wandering as much as 30 percent of the time, and eye tracking studies show that we zone out during an average of 9 percent of our reading. It’s also well established that a person’s attention begins to wane after 10 minutes and needs to be engaged to regain concentration. This is referred to as the 10 Minute Rule. 5,6,7

Seeing or hearing something that challenges them can jolt a viewer back into focus; they become involuntarily intrigued by the different and instinctively want to know more.

If you’re going to spend time writing, whether it’s thousands of words or just a single line, an attentive reader will simply be more receptive. But you won’t get there making mistakes for the sake of it, and you certainly won’t with unintentional typos or messy grammar.

Playing with language in a way that makes people think and stay engaged has been proven to work because it rewards them for paying attention with a message that justifies the stylistic choice.8,9

The language of pop culture

Some professional linguists believe non-standardized language is a sign of anarchy, a degradation of society and a sign of unrefined people. Others see it as a manifestation of pop culture; a combination of media, dialect, individuality and innovation.

The way people regularly communicate with each other through speech and writing influences how they understand usage. This is why words can develop new meanings, segments of a country can have different dialects and sub-cultures can talk in a way that sounds unfamiliar to people of the same language. It’s not a mistake; it’s human so respecting and understanding the way your customer persona speaks is a good place to start.13, 14, 15

Consider how you ask a basic question in English. The rules say a proper question is formed by taking the statement form of a sentence, then moving the auxiliary verb from its place after the subject to a new place before the subject. If no auxiliary is present, you insert a form of the verb “to do” at the start. The statement “You run” becomes the question “Do you run?”16

You probably follow this rule when you ask a question, but are you consciously making sure of it? Do you care if you make a mistake? If a question feels natural, sounds pleasant, creates resonance and is easily understood, most people aren’t concerned with the grammatical rules it may have broken.17 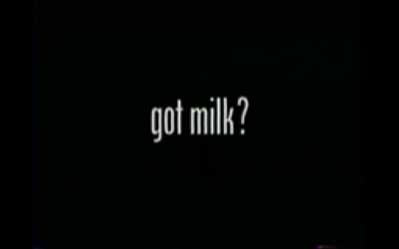 The “Got Milk?” slogan, like all great advertising, is derived from a simple human insight. Yes, it’s grammatically incorrect, but it’s derived from listening to how real people talk. This language was inspired by a focus group that was told not to have milk in any form for a whole week. The resulting line is casual and conversational, so the meaning was never unclear to the audience, despite being communicated “incorrectly.”18

The writers could have expressed this concept in many different ways, but this wasn’t a case of reverse engineering. No one wrote “Do you have any milk?” on a blackboard then scientifically determined how a layperson would say it. They just said it how they would say it. Sometimes talking like your target is just talking like yourself.19

Besides being another great example of an iconic piece of writing that breaks the rules of English, “Think different” also happens to be quality advice for improving communications. 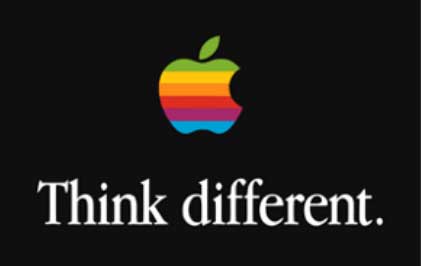 This line works particularly well because the error fits thematically with the message it’s communicating. The ad campaign featuring this line showed iconic historical figures who were disregarded at first because they didn’t think or act the same way as everyone else. This creates synergy between the words being used and the concept of the ad itself. Apple’s not only telling you to think from a new perspective. They’re telling you to embrace the alternative.20

The right way to write wrong

Everything discussed so far is even more important when bending the rules of spelling. Whereas an audience can judge a piece of writing on how it reads and how it sounds, regardless of whether or not the grammar is correct, a spelling error stands out visually. If the reason for the spelling error isn’t clear, readers will disregard it as a typo. The “EAT MOR CHIKIN” ad from Chick-fil-A has an instant visual cue for the viewer to explain the spelling. When they see the cows, the reader has a moment of realization because the meaning of the ad comes together in their head.21

Breaking the rules like this can benefit in another way as well. Think back to the 10 Minute Rule. When an error stands out, it acts as a stimulus and challenges the reader to pay attention. The initial impact of an unexpected element still needs to by followed by something that makes it relevant and meaningful. If you ask an audience for their focus, reward them when they give it to you.22, 23

Common sense always reigns supreme. If you can’t explain your choice or it simply doesn’t fit the brand, the audience won’t buy into it any more than you do.

And the wrong way to write wrong

In 2015, Wendy’s ran a television ad that tried to use the language and grammar of internet memes. One scene even had a character pose with the sandwich while blocky meme-style text was superimposed on the screen. The ad was not only rejected, but openly mocked online. In a way, it’s the perfect example to learn from. 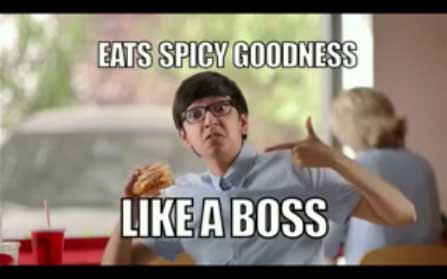 On paper, you could say it’s doing a few things right: playing with word choice in order to stand out and using the language of pop culture. Yet, anyone who has spent time on the internet engaging with memes could tell you that it fails on the execution of both.

It’s a boring attempt at creative rule-breaking. Instead of being inspired by internet language and humour, it’s derivative of it. The ad tries to repackage an outdated joke format and doesn’t even make its own joke while doing it. They seem to believe that simply mimicking something familiar is entertaining, in and of itself, thus failing to come across as fun or youthful.

If you choose to experiment with breaking the rules of language, always go back to the brief. Who are you talking to, and what is your brand trying to say? Think of the language you use as a partner to the strategy. Strategy without language is boring, and language without strategy is a bumbling mess. The more you study both, the better you will become at creating unique and memorable copy.

The goal of this piece is not to convince you that breaking the rules of grammar is the right thing to do for your brand. It’s about giving you permission to write or demand copy that breaks a few rules and pushes the standards of what is considered “normal” or “proper.”24

Only you can decide whether copy that breaks those traditional rules will strengthen your message, and you can’t do that if your copywriters aren’t allowed or allowing themselves to think outside of the grammatical box during their ideation process. At worst, it goes in the scrap bin. But at best, it can elevate your brand like it did for Apple, Chick-Fil-A and dairy farmers.

Quality comes from quantity. Try different approaches. Apply different techniques. Get inspired by other examples. The more you dig, the more likely you are to find gold.

And if you want an honest assessment of your ideas, feel free to send them through to info@reword.ca.

15. Trotta, Joe. “Whose Rules Rule?: Grammar Controversies, Popular Culture and the Fear of English from Below.”

24. Oaks, Dallin D. “Rethinking the Role of Grammar in the Advertising and Marketing Curriculum.”