Wave vs. Waive and Waver vs. Waiver 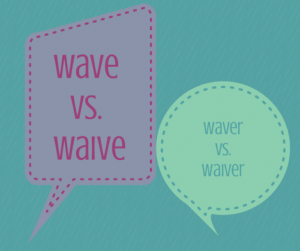 You’ve got to love those crafty homophones. For this month’s vs. post, we thought we would offer up a two-for-one. Wave, waive, waver and waiver all sound similar, and it’ll help to keep you on your toes by knowing the differences and when to use them.

These four words may not be part of your everyday writing, but if you happen to come across them, you’ll want to get them right.

The version of wave with no i can be a verb or a noun. When you move your hand back and forth or up and down to say hello or goodbye, you are waving. Something that seems to undulate or flow is considered wavy, while ripples of moving water are called waves.

You can also use this version when describing a large number of insects, people or anything else that approaches all at once. For example, “A wave of honey bees was seen flying into the city that morning.”

The word waive with an i means to voluntarily give up a right that you’re permitted to have, or to say you won’t be using something that’s usually required. You might waive your right to an attorney, or your insurance company might waive an extra fee because you have a clean record.

When you add an er to the end of waive, you have a noun that covers a few different meanings. Waiver can be the relinquishment of a privilege or right, intentionally. It can also refer to a document that provides evidence to the relinquishment, or an exemption from a law, rule or penalty.

In professional sports, waiver means something different. When a player on a particular roster is made available for other teams to claim, he is on waivers. If no teams claim him, he has cleared waivers.

Waver without the i is a verb that means to move back and forth unsteadily, to show indecision, or to falter or become unsteady. You might also use waver to describe trembling in sound.

For example, “His resolve began to waver after several hours of questioning,” or, “The singer’s voice didn’t waver, even when singing the highest notes.”

These words are trickier than they appear at first glance, especially when you’re in the middle of an important paper or report. As always, if you need some help feel free to ask, because we have the solution.