To vs. Too vs. Two — the Saga Continues 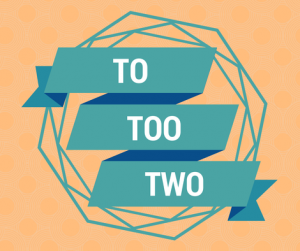 This month’s “vs.” selection deals with three words that are often confused, even though one of them refers to a number. If you listen to someone speak, you’ll notice that some version of this word is used incredibly often.

It’s usually used correctly when spoken, but writing it out causes some major headaches.  It’s also a source of frustration for those reading your words who know which one to use.  Let’s clear up the confusion right now, so you’ll never make the mistake again.

We might as well get the number out of the way first, so we can leave it behind and focus on the others. Two, is the correct way to write the number 2. It’s the only one with a w in it and it is used to describe something that isn’t related to grammar. If you keep these points in mind, writing the number two should no longer be an issue.

The kids are going to the park.

Throw the ball to the catcher.

Take the fishing gear to the boat.

As an infinitive before a verb, to looks like this:

I want to walk across the country for charity.

She must learn to write these words correctly.

It’s time to jump up and down and celebrate!

The whole business of infinitives and prepositions may cause some confusion, but using the correct form of the word to in these situations shouldn’t be overly difficult. The problems usually occur when the word too should be used and the writer uses to instead.

The word too has a couple of meanings. It is used as an alternative for also or as well or to show excessiveness. Here are a few examples:

I want to learn writing, too.

She is travelling to Europe, too.

These writing rules are too challenging for my liking.

The dog has gained too much weight in the past year.

If you can remember that the version with the extra o on the end is used to describe something extra, you should be able to get it right most of the time.