Then vs. Than…Yes They Do Have Different Meanings! 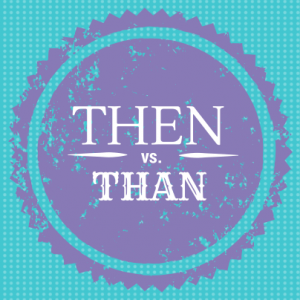 If you needed even more evidence of how one letter can make a big difference, ‘then vs. than’ is a great example. People make mistakes with these two words all the time, but they often slip by unnoticed because the readers don’t know the rule either.

This might be fine in text messages or on social media, but on your website, in business documents or on term papers, it’s best to have a handle on it. When you mix them up, not only is your meaning wrong, but you’ll make yourself look kind of goofy at the same time.

First, use then when you want to show sequence. “I learned the difference between the two words, then I was a whole lot smarter,” or, “Make a right-hand turn on Grammar Boulevard, then keep driving until you hit Perfection Lane.”

The second use for then is when you mean “at that time” or something similar. “I had no idea what the heck I was doing back then.” The third time for then is as a consequence.  “If you’d taken the time to learn about the words, then you wouldn’t mix them up all the time.”

You can also use then in a sentence as a reply instead of using “in that case.” An example might be, “I hate people thinking I don’t know when to use the right words.”

“Then quit being so lazy and learn when to use the right one!”

When you really get into the “then vs. than” discussion, the word then is usually used in the right context. The real issues start when you should be using than.

Using than in sentences really only follows one basic rule, yet an awful lot of people get it wrong in many different platforms.

Here it is: Use the word than to introduce a comparison. That’s as in-depth as it’s going to get. When you need to compare two things, use the word than and not then. In grammar-speak, than is a conjunction, but don’t concern yourself with that. Just remember that than is your go-to word when you want to make a comparison.

Here are a few examples: “After reading this post, I am much smarter than all my co-workers.”

“Tom’s desk is much smaller than Bill’s desk.”

“Writing about your experience as it happens is better than trying to recall it from memory.”

In the Same Sentence

Sometimes, you may encounter a sentence that includes a comparison and one of the then scenarios. “If you think you are smarter than me, then prove it!”

Don’t be upset if you’re still scratching your head, as these concepts can take some time to perfect. If you need some help organizing your thens and thans while you practice, give us a call, because we can help!