The Never-Ending Battle with Autocorrect 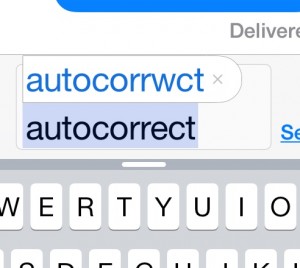 While it tends to act quite favourably when you’re typing at lightning speed on a mobile device, autocorrect is more of a troublemaker most of the time. Especially when it comes to texting or emailing on smartphones and such. Sometimes autocorrect knows what word we’re trying to type and it finishes our sentences like it’s our soul mate.

For those times that it chooses not to get us, there are some ways to make sure that grammar, spelling and word choices are in their right places. Here are a few things to consider when dealing with automated grammar police.

The Right Word at the Right Time

Unfortunately, developers of such automation haven’t settled on a way for it to decipher the correct use of context. You may have spelled the word whether correctly, but it’s wrong if you’re using it to describe how badly it’s raining outside. And such instances are not caught. So keep an eye out for homonyms that can be easily confused.

The Right Use of Singular/Plural

Another aspect of grammar that auto-correct doesn’t usually catch it presenting a clause that is singular or plural. For example, if you say there’s a lot of people attending the event, you’re wrong. Because people is a plural clause, it should be described with there are as opposed to there is.

When you’re reading through your work, isolate your sentences and look at each clause within that respective sentence to see how such information is being described. Plus, with that kind of attention, you may catch other mistakes you overlooked earlier.

The Right Attention to Detail

If you don’t trust yourself with the responsibility of catching such grammatical nuances, there are plenty of trusty editors out there that would be more than happy to.