Some Kick-Ass Ads in Just a Few Words 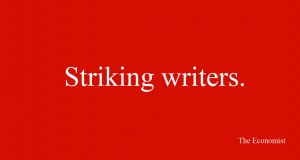 Advertising boils down to communication. And communication is all about getting the message heard. When we strip it down to its most basic form, all you really need are a few words to make that happen.

In most ads, visuals support words or vice versa. There are instances, however, where the copy stands alone because it’s so well done that anything more would just get in the way. (This applies to strong visuals as well, but we’re taking our obvious stance as wordsmiths here.) As you’ll see in the following examples, a truly powerful message communicates on its own.

“To all those who use our competitors’ products: Happy Father’s Day.”

Simple, witty and straight to the point. There is no need for pictures or fancy type. That would just take focus off the brilliantly crafted headline. Although any condom brand could have said this and gotten away with it, Durex did it first: our condoms are better than yours. That’s all there is to it. A simple logo at the end brings the punch line to life. And that’s all you need. Well done, Durex.

Writers at The Economist aren’t on the fence; their opinions are clear. And so is their advertising. Why beat around the bush with their ads when their product doesn’t? This is a strongly executed dual statement about how they communicate, no matter who they’re talking to or what they’re saying. Take notes, kids.

“Give the gift everyone will want to return: a smile.”

This ad isn’t even selling anything. The entire PeopleForGood.ca campaign is to encourage people to do good deeds for their fellow humans. Who would have expected that from the heartless, greedy advertising industry? Maybe it’s time to rethink your perspective on it, as advertising has done quite a bit of good, too. This ad has no need for word play. The headline is the call to action: smile at people, they’ll appreciate it. What more could society need during the holidays than that little bit of inspiration?