As copywriters, copyeditors, proofreaders and translators, our heroes are people with a gift for words. In this new regular addition to our blog, we’ll be looking at the men and women whose voices transcend their industries and whose words are quoted, remembered and revered. Today, we’re looking at Cicero.

Marcus Tullius Cicero (or “The Big Cis” as we would’ve called him) was a lawyer, politician and incredibly gifted public speaker. He lived from 106 BC to 43 BC in Rome and is generally credited with writing the rules for effective public speaking: docere, delectare, et movere. This essentially translates to prove your point, make ’em smile and drive action.

But what made Cicero a language legend in our mind wasn’t so much his gift as it was his purpose. He believed that anyone could excel at public speaking, and more importantly, that everyone should speak publicly.

The right man for the right time

Cicero lived during the reign of Julius Caesar, and it was an interesting time in the history of Rome because Caesar, much to the chagrin of the Roman senators, thought it necessary to greatly expand the rules of citizenship and grant status to infinitely more people. With citizenship came rights, and one of those rights was the right to be heard. The problem, though, was that few of these new citizens had the first clue about how to have their voices heard. They were used to being serfs or slaves or second class.

His book, conveniently titled Orator,was essentially a how-to for the masses. He envisioned a world in which anyone could stand on the senate floor, make his case to the powers-that-be and effect real change.

The Godfather of Plain Language

A big sticking point at the time was the educated class’s instance that big ornate wording and pretentious construction denoted intelligence. Cicero thumbed his nose at this ridiculous assertion, preferring a return to the Attic style of speech, which is rooted in simplicity and respect for the reader or listener. Incidentally, a short 750 years prior, Atticism was the order of the day, as illustrated in the works of Homer. In fact, many scholars argue that Homer’s work stood the test of time for precisely that reason: he was an educator for all of Greece.

Cicero encouraged people to find their own style of speaking, and that by being true to themselves, they would have a much better chance of being heard.

Many argue that we live in an age where Cicero’s principles have run amok ¾that too many people feel far too comfortable sharing their opinions. And if you read through the comments section of any news article, you may agree.

But we’d argue that the opposite would be much worse. If our right to speak is sacred, so too should be our ability to speak well.

For stressing the importance of having a voice and learning how to use it, for believing that everyone deserves to be heard and for legitimately putting his money where his mouth was, Cicero is a language legend. 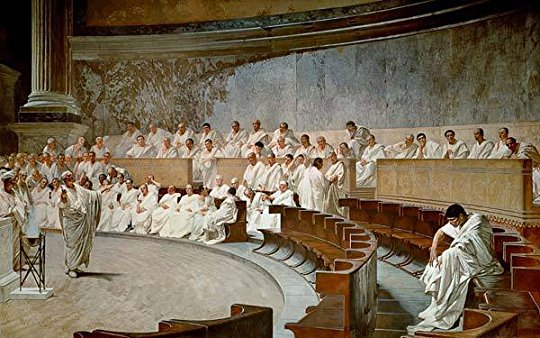