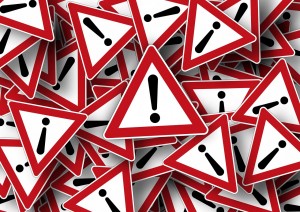 Or so we believe.

The upcoming generation doesn’t think so. According to a 2015 CBC article,

The exclamation point was found to make messages seem more sincere, rather than less, as it conveys information about how someone is feeling (enthusiastic, usually, or at least very strongly about something).

While some in recent years have lamented the rise of the exclamation point as the fall of proper grammar, many digital natives now see it as somewhat neutral — especially in an era of cry-face emojis and Instagram hearts.

But that’s not all the article said. It also referenced a study that found a change in the period’s reputation.

“The period was always the humblest of punctuation marks. Recently, however, it’s started getting angry,” wrote Ben Crair for the American magazine. “I’ve noticed it in my text messages and online chats, where people use the period not simply to conclude a sentence, but to announce ‘I am not happy about the sentence I just concluded.'”

So let’s get this straight.

To be seen as sincere, you have to come off as overly excited about everything. And to avoid seeming pissed off, you have to ignore the first and most basic rule of grammar.

A: What’s this world coming to?

B: It’s just the way the language is evolving!

A: It’s stupid. And it makes communication more unclear.

A: At the expense of clarity.

B: Hey! Can’t make an omelette without breaking a few….!