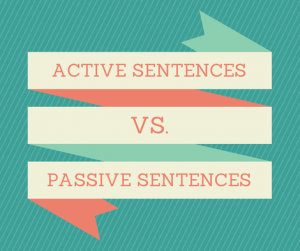 In an earlier blog post, we briefly touched on the subject of active sentences and passive sentences. Usually called active voice and passive voice, this designation affects the meaning and effectiveness of almost any sentence.

Writers are constantly instructed to write in the active voice, but it’s not always easy to distinguish between the two. Here are some tips to help you along.

In a passive sentence, the object of the sentence is moved to subject status, but the subject doesn’t perform an action. If we use the previous example, “Tommy loves Jill” is changed to “Jill is loved by Tommy.” It basically says the same thing, but the focus shifts from Tommy to Jill.

Most writers are taught that creating sentences that use a form of the verb “to be” are passive and should be avoided. Most of the time, this concept is true, but not all the time.  If you say, “I am lifting a box,” you are technically using a form of “to be” but you’re still using the active voice.

If you wanted to make that sentence passive, you’d say, “The box is being lifted by me.”  These instances provide a challenge, but if you can keep in mind that in a passive sentence, the subject is not performing any action, it will help you keep them straight.

Is Passive Ever Ok?

Using the passive voice isn’t necessarily wrong, it just isn’t an effective way to present your point of view or thoughts to readers. Passive sentences are often awkward and clumsy and may seem vague. They tend to disrupt the flow and cause readers to stop and think about what they just read.

Sometimes, politicians use the passive voice for intentional vagueness. “Shots were fired.” “Mistakes were made.” These tell you what happened, but don’t tell you who took the action. There is no subject in the sentence. The evening news is a great place to hear passive sentences.

Some places where passive sentences may be the best option include crime reports, fiction writing and in scientific reports or journals. “The bank was robbed” works because the assailants are still unknown. In a crime or mystery novel, “The priceless jewels were stolen” might flow better than, “Someone stole the priceless jewels.”  Scientists use it to maintain objectivity and keep themselves out of the equation and the results.

Keep working on your passive and active voice, and if you have more interesting examples to add, feel free!