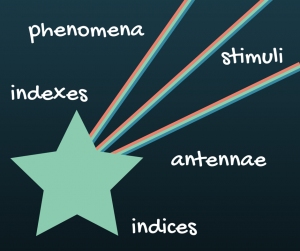 The following sets of irregular plurals are so commonly confused that you may not even know there were singular and plural versions of them. Especially when heard in spoken word, the wrong usage sounds perfectly correct. The following examples will demonstrate the beautifully obscure nature of the English language in all its inconsistent glory. After reading through these distinctions, you’ll know when to use the right plural or singular versions of these particular words.

Believe it or not, phenomena is the plural of phenomenon. It’s not phenomenons.

As he saw a shooting star, he marvelled at the natural phenomenon.

There are a number of phenomena that scientists are still trying to figure out.

To make matters even more confusing, the singular antenna has two plural versions. Antennae is the plural form in the context of insect antennae. Antennas is the satellite version. Be careful when making this distinction.

Ted installed an antenna on his roof to pick up more TV channels.

The bee’s antennae were moving in all different directions.

The building’s antennas constantly made a buzzing sound.

Stimuli is the plural of stimulus. Not stimulusus.

The stimulus she felt as a teacher was like nothing else she had ever experienced.

Various stimuli can affect the function of the brain.

Here’s another example of double plurals. Except these ones can be used interchangeably. Both indexes and indices are correct plural forms of the singular index.

This year, the bell-curve index was above average.

Based on this month’s indexes, the recruitment rate was up.

The indices showed a correlation between height and weight.