Complex to Simple: Communicating with the Masses 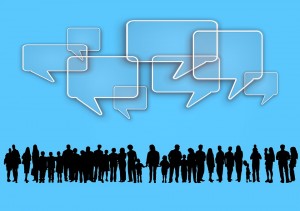 Your client hands you a 50-page manual explaining the scope of the latest artificial intelligence software they came up with. It was written by the engineer who created it. Now you have to share that with the general public. Yikes. Where do you even begin?

It doesn’t matter if it’s artificial intelligence or Plato’s theory on friendship — any complex topic can be proven simple if given the opportunity. Here are a few tips on how to break down heavy concepts into light and breezy descriptions that will only leave the engineers who wrote them scratching their heads.

Know it well enough to explain it simply.

This comes down to very thorough research. Or, if it’s a 50-page manual written by the guy who developed it, a simple read-through a few times. If anything whatsoever is unclear to you, make it clear. Ask all the questions to anyone involved on the other end of it. Figure out how it works inside, outside and sideways. Determine what inspired the people to develop it in the first place. The more you know, the easier it will be to explain. Keep in mind that you’re the one to explain it to everyone else.

This is great to keep in mind for any type of mass communication. Just don’t make it sound condescending. They’re not idiots, they’re just aliens who’ve never been exposed to whatever it is you’re talking about. This is where knowing a lot about your given topic can work against you, because it’s so engrained in you that you assume people know what you know. They don’t. When you mention things like hardware and software, follow up with a very brief side note that the hardware is the machine you’re operating your programs (or software) on. A short description like that doesn’t make a dent in your overall communication, yet it makes a huge difference to your reader.

If you want to explain things simply, don’t cram more than one thing at a time into your sentences. Your overall efforts will be futile if you do. Remember, you’re trying to eliminate every opportunity to confuse your reader. This is a time you’d want to ditch the thesaurus, or use it to find the simpler, more everyday term for whatever it is you’re talking about. Now is not a time to be fancy. Save that for your doctoral dissertation.

If you drop a term like SEO, I of T or the Cloud, it’s unfair to assume your reader will know you’re referring to Search Engine Optimization, the Internet of Things or Internet-based file storage. And even if they could recognize the acronym, what are these things? If you mention terms like this, make it clear what their function and purpose are, as well as how that’s relevant to what you’re talking about. They’ll take away newly learned terminology, which makes reading your content that much more valuable.

If you say that the technology will tie into their I of T (Internet of Things) initiatives, go beyond the mere clarification. Fortify that claim with an analogy that puts in into an everyday context:

The Internet of Things is a term that describes the interconnectedness of technology (phones, tablets, computers, etc.) through wireless Internet. So think of it as a power bar with six different outlets where each device has a cable that plugs in and connects them all to each other. That’s I of T in a nutshell, only there are no wires involved and you can access them from anywhere.

When you make a point, make it again. You can’t be sure they got it the first time, so give it to them a second time just in case. The second iteration should be even simpler than the first, like an afterthought to gather what you just said. Legendary ad man George Lois said it best: Tell them what they’re about to hear, let them hear it, then tell them what they just heard.