Juli A. Herren wrote a great piece about the value of good writing to designers for InVision. All 1,466 words of it are bang on. But far too often, designers aren’t given good copy to work with. They get copy written by marketing managers or junior SEO strategists who, to be fair, did their best. But what if their best isn’t good enough to compete in an oversaturated world? And what if no one on the client side has the bandwidth to get it where it needs to be?

You can, though. And it’s an easy sell when you consider what better copy can do for your client:

The disciplines are too divergent. And any senior client worth their salary will know that a design firm offering original copy is compromising both. It’d be like the salt factory making pepper.

But copyediting is different. It’s about improving what’s already there. It’s about a messaging perspective. It’s about truncating and reordering, punching up and toning down. It’s about turning 70 percent into 98 percent. And it’s about coming back to the client with “this is what your piece looks like when everything’s working well.”

So how should design agencies offer copyediting?

First and foremost, it shouldn’t be a full-time position. Even if you have a large need and could keep a copyeditor busy 40 hours a week, you’ll want your copyeditor(s) to be as removed from your process as much as possible. It’s the only way to get a truly unbiased perspective, which is what you want.

Secondly, you want a copyeditor with cross-industry experience. You’ll want them to have been exposed to different message presentation styles they can draw from when reviewing your work. Like with design, the possibilities for copy are endless when you know what needs to be conveyed.

Thirdly, you’ll want affordability. That’s why you won’t want to bring on a copywriter to do your copyediting. A copywriter will charge on average 40 percent more than a copyeditor because starting with a blank page is a different skill that commands a higher price. If you position the value prop of copyediting properly, you could profit upwards of  25–35 percent on all jobs that include copyediting ¾which really should be every file with words, even if it’s a proofread.

Now think about how many files you send out in a typical month and do the math.

What can copyediting do for a design agency?

If you’re a design agency looking to boost revenue in a helpful way and you don’t yet have a reliable go-to copyeditor, let’s talk. We’ll make your client feel better about you and the work you give them. 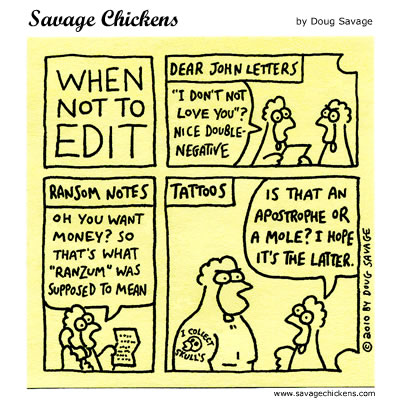 The person Gee is quoting is Paul Knox, another Globe and Mail staffer and Professor Emeritus at Ryerson University. We’re big fans of this #Paulism, and if you’re in communications or marketing, you should be too.

Avoiding confusion is your number one priority.

Selling might be (and probably is) your number one goal, but priorities and goals are different. You won’t sell if you’re confusing. Or worse, you’ll sell for the competition. We’ve seen this happen a few times. One company clearly identified a legit problem no one had addressed previously, but then did a poor job articulating their solution. Prospects left to find more digestible explanations (drop-off data demonstrated this), which a few of their competitors had. It’s that easy to earn then lose an opportunity.

If you care about customer growth, use a copyeditor.

That breach in time referenced in the #Paulism above cuts more than one way. Your prospect has lost interest, but have they forgotten? If you’re lucky, they have. If you confused them and wasted their time, they might not.

Think about it: they chose to devote a sliver of time (their most previous resource) to let you convince them to do/feel/say/buy something. And you couldn’t even take the time to scan it for sloppiness.

Imagine a dirty bathroom in a nice restaurant. It doesn’t matter how much they spent on European toilets, or what the food was like for that matter. You’ll always remember the dirty bathroom. It will be part of what you tell people. And what if you’re the kind of person who takes pictures of this kind of stuff for BuzzFeed listicles? Not so good for the restaurant.

Now think about how many BuzzFeed-style typo listicles there are.

If you care about customer perception, use a copyeditor.

The last reason to use a copyeditor has nothing to do with customers unless the people who write your materials are also customers. Another person Gee quoted in the piece was Mary Norris, a copyeditor at The New Yorker, who said:

“Even the best writers often turn in sentences with danglers, insisting that they know what they mean and that readers will know, too.”

So even if you believe the people writing your materials are among the best writers in the world (and we sincerely hope you do believe that), you should still use a copyeditor. Your writers worked hard on whatever you’re bringing to market. So did your designers, publishers, account executives and strategists. And so did your client. Do you really want to be the person who flushed all that effort down the toilet? These people have your back every day. Using a copyeditor demonstrates to them that you have theirs.

If you care about your people, use a copyeditor.

Last point about using copyediting: It’s not expensive. But don’t look at it in terms of ROI. Look at it in terms of DOI (depletion of investment). Copyediting a 12-word transit ad is a negligible cost, over and above the thousands it already cost to produce the ad. Not using a copyeditor, letting a mistake go through and having to reprint will cost a lot more.

Copyeditors are your friends. Use them.