The small marketing teams we work with all have the same problem: time. It’s impossible to do it all, but in today’s world, you kinda have to: inbound, outbound, social, experiential, trade shows, content, blah b’blah b’blah. And every day, the list grows because every day there’s a new way to get the message out. Keeping up during the day is what’s keeping them up at night — mostly because they don’t leave the office.

So how does a marketing team of one or two stay ahead? By doing these four things:

SMART stands for Specific, Measurable, Agreed-upon, Realistic and Timely. And doing anything else will put you in hot water with everyone else in the company. Let’s look at them in reverse order.

Timely’s important because it’ll keep the momentum of your efforts going. If you don’t give yourself hard deadlines, you’ll push everything off. Timely will also keep your organized, which, if you’re running lean, is so hard to do especially with everything you have to juggle.

Realistic keeps you from promising the moon and only delivering a few clouds. They key here is to know what’s possible in a given timeframe. This’ll be different for every marketing team depending on their size, experience and contacts, but the approach should be the same: don’t promise anything you can’t deliver.

Agreed-upon is the CYA portion of SMART goals. Once you get organizational buy-in, no one can come back and accuse you of under-delivering — unless, of course, you do, which shouldn’t happen if you stick to timely and realistic.

Measurable gives you a target to strive for. Without it, you’re just firing arrows in the air and hoping for a bullseye.

Smart comes from having time to sit down and think about things. Which is the one thing you don’t have. This leads us to the second thing all small marketing teams should do.

Making the most of free social media

Small marketing teams are usually saddled with small budgets. Sound familiar? It should. According to the Wall Street Journal, the average company spends 7.5% of their revenue on marketing. Once you factor in salaries, that doesn’t leave a lot of wiggle room for anything else.

In this way, social media can be your best friend if you use it right. This means offering clever, thought-provoking content on a regular basis. Does this mean you have to blow your brains out on every social media channel out there? No! In fact, the opposite is true. You want to pick one or two channels that make sense for the audience you’re targeting and kill it. Spreading yourself too thin will lead you back to the “no time” conundrum you’re trying to avoid.

In the interests of time, you’ll also want to schedule your posts in advance so you’re not scrambling for something to share. Booking a block of time every week to do it will save you a ton of time throughout the week.

Before you pick your channels, it’s important to know what channels your ideal customer frequents. And they may not be the most popular ones. That’s okay. Twitter’s not for everyone. And if it’s not for you or your customers, don’t waste your time on it, especially since best practice is tweeting 10 to 15 times a day.

Once you pick your channels, get to know everything about them: how they work, how people on them like to be engaged and spoken to, and how to get your content out there organically. The most successful social marketing isn’t about outspending —  it’s about outsmarting.

It’s easy to market the solutions your company offers. You know them like the back of your hand, you can recite them to anyone who asks. But unless you present a problem your ideal customer can relate to, presenting the solution is a waste of your time.

And problems evolve over time, even for the same customer. In our case, for example, our editing service used to exclusively solve the “I don’t want to have to spend money reprinting misspelled materials” problem. It since evolved into “I have so much content to pump out that I don’t know if any of its good anymore” problem.

The only way you’re really going to know your customers’ problems is to ask them. We suggest bi-annual check-ins. Literally ask them what’s causing their hair to turn grey. We do it all the time and our clients are more than happy to tell us.

Even the marketing teams at billion-dollar agencies farm out their work — mostly to hot-shot ad agencies. But if you’re a small team at a small to midsize business, you probably can’t afford the big boys’ price tags. Fortunately, the streets (and the Internet) are lined with small, specialized companies that can do what you don’t do. We’re a good example of that. Our clients hire us to write what they don’t have time to write, edit what they barely had time to write so it doesn’t feel rushed through, and translate what needs to be translated because they don’t speak French. The benefit of looking outside is both qualitative AND quantitative: the work gets done by experts in their field and you have more time to do what’s actually part of your job description.

Children’s books are written and illustrated to be read over and over again. Some colleges have courses dedicated to teaching the best ways to drill letter and pattern recognition, phonics, syntax and basic communication through repetitive reading of the same book. And if you read a book enough times, you’ll see your little one start to memorize some of the pages and recite it with you. It’s so much fun when that happens.

But there comes a time in every book’s life when the thought of gouging your eyes out with lemon-doused oyster shells is far more preferable to reading it again. And to be clear, this has nothing to do with the quality of the book. We’re HUGE Nick Bland fans. We have every book about every bear he’s ever written about. But even those started to wear.

The good thing about quality kids’ books is that the quality always shines through a second time around. So when you get to the oyster shell point with a book you know is good, just put it away for a bit. Don’t give it to a friend because you’ll never get it back. But think about making a book bin where your favourites go. Every so soften, do a swap and bring a few of them back into rotation.

What you’ll see clearly is how well your kids retain the information from a good book. They’ll remember the dancing Wild Things, the details of Alexander’s terrible, horrible, no-good very bad day and roughly where Waldo is on every page.

And if we could be so bold as to recommend a new book for your rotation, check out The Book With No Pictures by B.J. Novak. You might get sick of it a bit quicker than other books, but it’s totally worth it for the first read.

On a related note, B.J. Novak is also an actor and co-starred in Inglorious Basterds — one of the greatest movies ever made. That’s him on the right. You probably know the guy on the left. 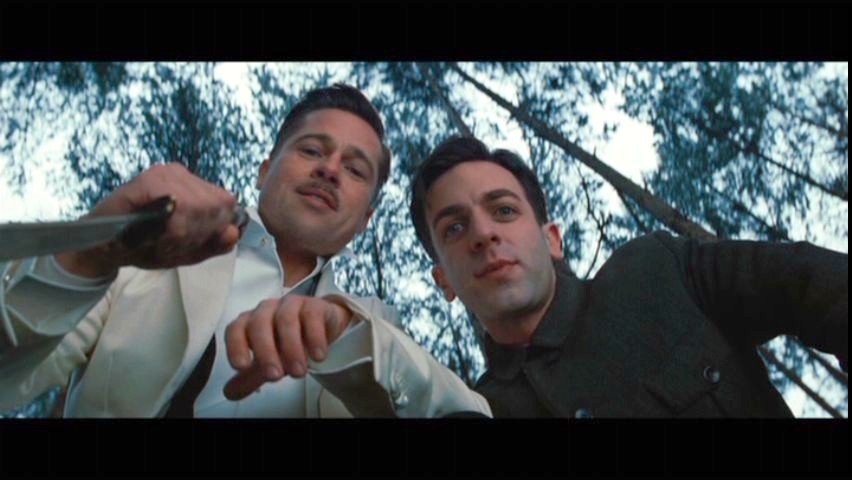 A shout out to the WWE scriptwriters

We belong to the fortunate generation that got to experience the best eras of wrestling at exactly the right ages.

In the mid-eighties, we were pre-teens and no one was cooler than Hulk Hogan. No one was friendlier than Andre The Giant. And no one was more dastardly than Rowdy Roddy Piper. And the story lines were simple with easy-to-recognize good guys (faces) and bad guys (heels). That’s really all ten-year-olds need.

Then, in the late ’90s, we were in our early ’20s, questioning authority and looking for anti-heroes — people who stuck it to the man like we all wanted to. People like Stone Cold Steve Austin, The Rock and The Undertaker.

And the savvy marketers they are, the WWE creative team gave us disorder in spades. The line between heel and face was blurred. Stone Cold was a good guy, but he was an asshole. Triple H was a heel, but he was so over-the-top charismatic that we loved hating him and found ourselves cheering for him, even though he represented everything we hated. And The Undertaker was just so goddamn cool.

So who cares? We do because the scriptwriters and story editors made it all happen. The catch-phrases. The story arcs. The interviews. The build-ups to big matches. No one does it better than the WWE on a more consistent basis. They know their characters. They know their performers and they write to the strengths of both.

Now, of course, it all rests on the mic skill of the wrestler because no amount of good writing can save a crappy performance. But when you get a natural like The Rock (you might know him better as Dwayne Johnson — today’s highest-grossing action movie actor) and give him a few well-crafted lines to throw down, well…

Side note: The WWE is a dream client of ours. We’ll work with them one day.