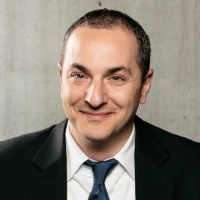 We write our fair share of speeches, but Rick Kotick, Head of Competitive Intelligence, RBC Global Asset Management, writes more. He speaks at least twice a month to investment advisors and mutual fund wholesalers across the RBC network, MBA students at York University’s Schulich School of Business and members of the Junior Achievers of Central Ontario. And he’s a Toastmaster. He sat down to talk to us about his process, managing stage fright and how he overcomes what he thinks is the hardest part of speech writing.

Re:word (RW): Thanks for taking the time to chat with us.

RW: First off, how long are your speeches generally?

RK: My presentations to advisors are generally 20 to 30 minutes with Q&A at the end. The workshops are 90 minutes and when I give speeches at my local Toastmasters club, they are 5 to 7 minutes long.

RK: Online sources are my first port of call. As part of my job, I also regularly read industry research reports on market trends. In general, you can get inspiration on content from anywhere. YouTube videos, chats with friends and family, etc.

RW: So once you have your angle and your information, where do you generally begin the speechwriting process? Do you go sequentially or do you sometimes start in the middle or the end?

RK: I’m sure everyone’s different but I’ve found that the best way for me to write a speech is by creating on outline first. It helps me organize my ideas, set the material in a logical form and shows me the relationships among ideas.

Once I have the outline, I list the key points, arrange them in order and expand on each one. Then I develop the intro and the close. Once you have a well-structured outline, with key points listed in a logical order, you’ve got 80 percent of your speech already written. The introduction and conclusion should flow naturally after that.

RW: Do you have people look at your speeches before you give them? If so, who?

RK: I practise my speech in front of friends, colleagues and/or family members. I’m fortunate enough to have people I trust and whose feedback I value. There’s no such thing as a perfect speech so I try to incorporate their feedback before I go “live.”

RW: Interesting that you say there’s no such thing as a perfect speech. But some must be better than others. How do you know when it’s killer?

RK: I never know until after I deliver it. People aren’t shy about giving you their feedback or sharing their views on your topic. During your speech, though, you can tell if your audience is engaged and listening to your every word. That’s a pretty good indicator that you’re holding their attention and haven’t put them to sleep.

RW: Speaking of audience, is there anything specific you like to know about them as you prepare?

RK: Other than the basic demographic information (age, male/female ratio, occupation and education), I like to know things like political orientation and what they generally like to do for fun. It helps me weave in some anecdotes I can use to connect with them.

I also like to know what they know already so I don’t waste their time. That’s probably the worst thing you can do in a speech. Especially these days when it’s so easy to lose people’s attention to their phones.

RW: Well, you’re clearly doing something right, given the profile you have. Is there something notable you’ve learned over the past few years on the speaking tour?

RK: It seems intuitive but practice makes perfect. It’s exceedingly rare to find someone who can wing a speech or prepare it the night before and pull it off with ease. Effective verbal communication is rare yet essential in any line of work.

I’ve also learned that soft skills are a differentiator. Many people have the right mix of technical skills and education but they can’t effectively convey their ideas to a general audience. The best way to set yourself apart is with the ability to communicate smoothly, succinctly and effectively.

RW: Does the practice and prep help you get over stage fright?

RK: I’ll let you in on a little secret. Anyone who tells you they don’t battle their nerves before giving a speech is lying. I’ve read about and researched famous orators, stand-up comedians, politicians and musicians and the one thing they all have in common is a feeling of nervousness before they perform. Having butterflies before giving a speech is not a bad thing. Everyone has them. But making those butterflies fly in formation can help you harness your nervous energy.

RW: Speaking of nerves, what’s the hardest part of speech writing in your opinion?

RK: Getting started is without a doubt the biggest obstacle for many people. But using a simple structure like an outline can get you over that inertia. The outline is also a way to beat the procrastination bug ¾ and that’s something that every speaker battles with, no matter how much experience they have.

RW: We’d be remiss if we didn’t ask you this one last question: does having a well-written speech make giving the speech easier?

RW: That’s not exactly the answer we were looking for.

RK: Fair enough. But I can tell you this: you can’t hide behind crummy content. If a speech isn’t well-researched, if it doesn’t have strong salient points and if it doesn’t leave the audience with something to think about, it won’t matter how well it’s delivered.

A word is worth an infinite number of pictures

What’s more powerful, a word or an image? It’s a hotly debated topic in creative circles and cases have been made for both. Here’s our case for words:

When you read a word, your mind pictures the subject. Take “horse,” for example. Are you picturing a white horse or a black horse or a brown horse? Is it a stallion? A mare? A Clydesdale pulling a Budweiser stagecoach? Is it a racehorse? And if so, is it a thoroughbred (jockey on top) or a standardbred (jockey in a chariot behind)? Or maybe you picture horse the basketball game or horse the slang for heroin?

Point is, a word activates the mind and lets it go in any direction. An image is designed to contain no ambiguity. Yes, it’s helpful. But is it more powerful? Sure, everyone experiences an image differently, but they see the same thing. With a word, everyone sees something different.

So what can a good copywriter do with words?

In a word (two, actually): thought guidance. We use these words to elicit the right picture in the reader’s mind and the right emotion in their hearts. We get them to see the ideal state: the easier life, the better day, the more productive hour, the prettier date, the larger boat or the better food.

And then we use our words to create action. Pictures can’t do that — they can attract eyeballs but they can’t move hands. Only words can do that. The right words. At the right time. Arranged in the right way. And shown to the right people.

Think about this the next time a banner ad,  brochure or billboard catches your eye. Think about how it made you feel, then think about what made you feel that way: the way it looked or the message it delivered.

Here are a few that caught our eye over the years. We wish we wrote them all: 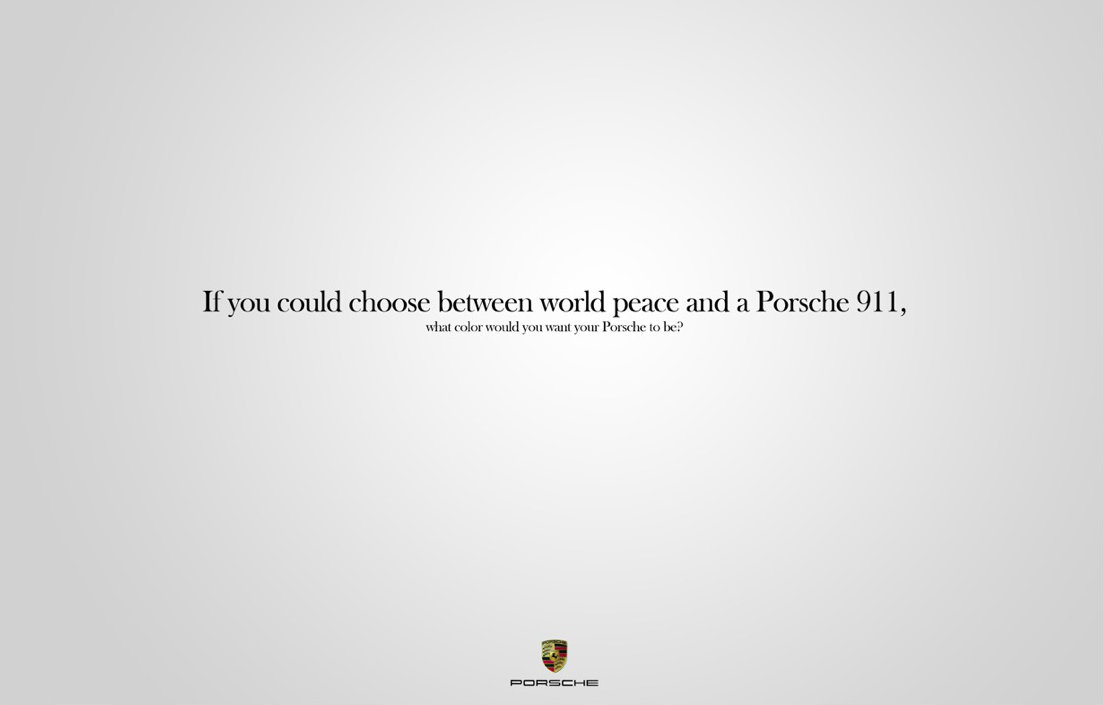 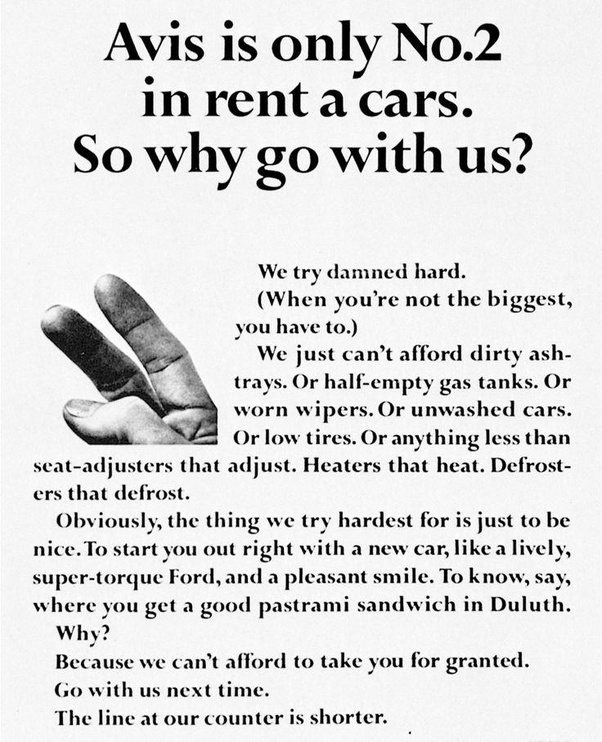 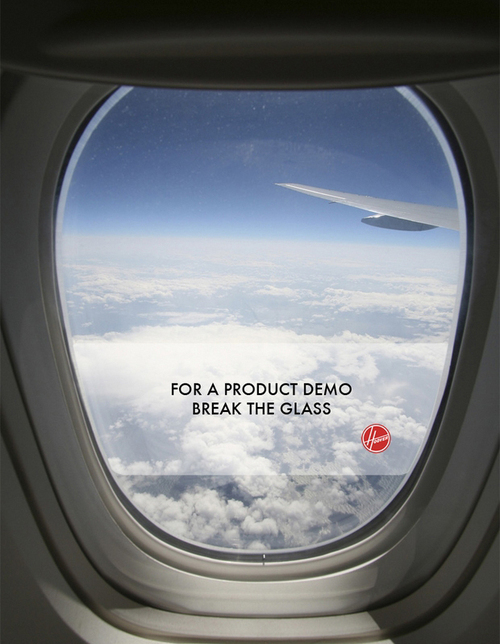 The image sucks you in. The copy gives you the feeling of being sucked out. And you get it. 100%. 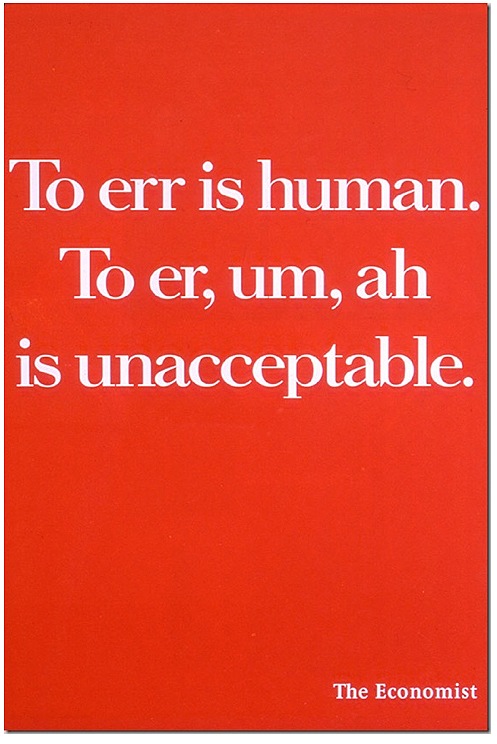 The Economist is the best for clever. It’s true in their magazine AND their advertising. No image necessary. You can picture The Economist reader and their level of intelligence. And you want to be like them.

We get back to people promptly. We even allude to it as part of our email signature, which looks like this:

It seems like a no -brainer, but yet we get so many people thanking us for a quick callback as if they’re not used to it. It strikes us as odd that more companies don’t follow the first rule of customer service: 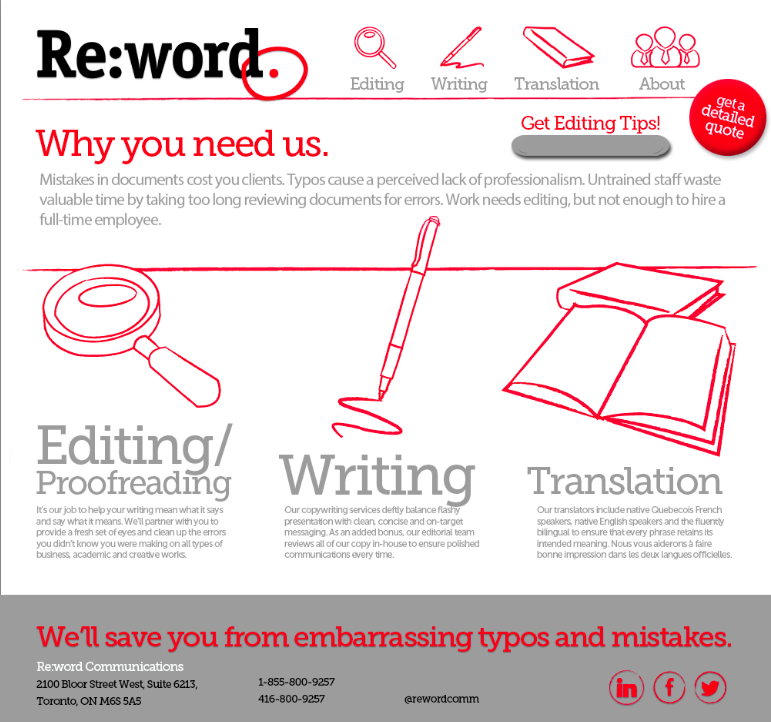 It wasn’t awesome but we didn’t know any better. We were happy to be out there living the dream. Then on day 3, a request came in from Suzanne who needed her company’s shareholder report edited. We were ecstatic. We were about to make our first official dollar. We called her back right away, took the brief and ran with it. The final product was delivered on time and it was “perfect…so much better!” — Suzanne’s words.

There’s the work. And then there’s the experience.

Responsiveness. That’s what made Suzanne feel better about choosing us. Because, if we’re honest, any editor worth their hourly would have been able to do the work well. But she was our first, and more than making a good impression with the work, we wanted to show her we really wanted her business. Because we really wanted it. So we took the four calls she made in the six hours we spent editing her piece. We delivered when we said we were going to deliver. And we explained the choices we made.

And as for Suzanne, we wound up doing three more projects with her at that job. She’s since moved jobs twice and continues to reach out for copy editing from time to time. And we always call her back promptly — every time she calls.

Even professional writers get stuck from time to time. It happens. And when it does, it’s positively terrifying.

Imagine, if you will, a terrible, horrible bully staring you in the face, mocking your every move. He blocks every path you can think of to get around him. And just when you think you have the way, he pulls you by the back of the shirt and drags you down.

That bully is a blank page, and he’s relentless.

So what’s the answer?

Well, it’s the same answer you’d give a ten-year-old confronting a bully in the school yard: whatever you do, don’t back down.

In our world, that simply means “keep writing.”

One of our favourite scenes from any movie is towards the end of Braveheart when William Wallace is talking to his buddies about taking a meeting with Robert The Bruce. They know it’s a trap — and deep down, so does he. But he says to them: “We’ve got to try. You know what happens if we don’t? Nothing.”

The same’s true of writing. So we push on. We pepper our walls with headlines and subheads, first thoughts, fragments, inklings and ideas. Most of them end up in the bin where they belong, but the ones that survive blossom into something more. They’re the start of a master brand positioning, a killer message or a paragraph of body copy that seals the deal with the reader and gets them to act.

Some people are appalled by the amount of paper we use (especially since we don’t like using both sides). But for us, it’s all for a greater purpose: to get to awesome.

And when we do, we slay the bully. And if you’ve ever dealt with one of those, nothing feels better. 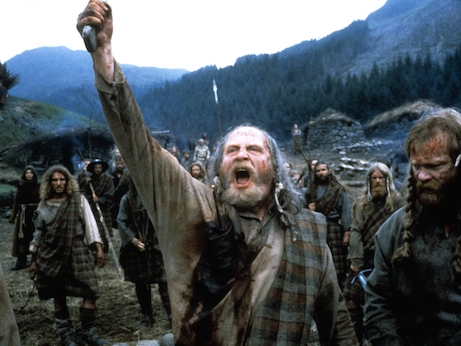 Slay the beast! Defeat the bully!! Put down the enemy!!! McYolluch!!!!