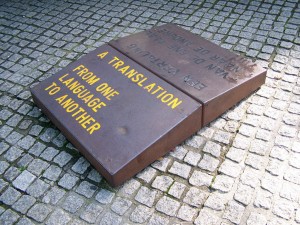 Contrary to popular belief, speaking two languages doesn’t make you a translator. Sure, you could get the main point across and in doing so get what you want. But that logic doesn’t apply to written communication. Especially when it’s published.

These people seem to think that a few English lessons make them professional translators. Because knowing English better than everyone around you automatically makes you the expert and gives you authority on all matters. Not like anyone would know the difference.

We do. So here are a few examples of miserable translation failures it would benefit to learn from. Lesson: if you want to translate, consult a real professional.

A French chick on a platter? They must have meant chicken cooked in a French style. But who knows, really? Customers expecting a French woman coquettishly lying on a platter will complain about false advertising if this isn’t made clear.

Watch out! The paper packaging around these habanera peppers is hot! Brought to you straight off the printing press. If you act fast, you can get it while it’s still steaming. How did this get past quality control? Labels can be deceiving. Exercise caution.

In a twisted way, this is kind of poetic if you think about it. Too bad it’s not intentional. The need for a reminder to flush after doing your business is worrisome enough. “Withdrawing the need” is in its own category.

Too obtuse for words.

Ahhh. One set of letters can do quite a bit of damage, as you can see. This angel takes a different angle on life. Perhaps we should learn from her example. This is unfortunately a very common error among native English speakers. Sigh.

A cut above a regular menu.

We had to save this one for last. Where do we even begin? We can’t decide between the frog raised in man-power or the pig fertilizer. They must have meant frogs that weren’t captured from the wild. But we’d rather not know what’s in the pig fertilizer casserole. Better stick with a salad.

Some Kick-Ass Ads in Just a Few Words

Advertising boils down to communication. And communication is all about getting the message heard. When we strip it down to its most basic form, all you really need are a few words to make that happen.

In most ads, visuals support words or vice versa. There are instances, however, where the copy stands alone because it’s so well done that anything more would just get in the way. (This applies to strong visuals as well, but we’re taking our obvious stance as wordsmiths here.) As you’ll see in the following examples, a truly powerful message communicates on its own.

“To all those who use our competitors’ products: Happy Father’s Day.”

Simple, witty and straight to the point. There is no need for pictures or fancy type. That would just take focus off the brilliantly crafted headline. Although any condom brand could have said this and gotten away with it, Durex did it first: our condoms are better than yours. That’s all there is to it. A simple logo at the end brings the punch line to life. And that’s all you need. Well done, Durex.

Writers at The Economist aren’t on the fence; their opinions are clear. And so is their advertising. Why beat around the bush with their ads when their product doesn’t? This is a strongly executed dual statement about how they communicate, no matter who they’re talking to or what they’re saying. Take notes, kids.

“Give the gift everyone will want to return: a smile.”

This ad isn’t even selling anything. The entire PeopleForGood.ca campaign is to encourage people to do good deeds for their fellow humans. Who would have expected that from the heartless, greedy advertising industry? Maybe it’s time to rethink your perspective on it, as advertising has done quite a bit of good, too. This ad has no need for word play. The headline is the call to action: smile at people, they’ll appreciate it. What more could society need during the holidays than that little bit of inspiration?

US vs. Canadian Spelling: Why is There a Difference? 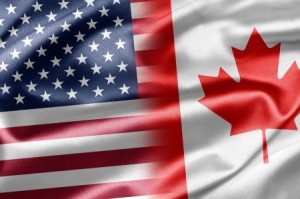 Favorite vs. favourite. Color vs. colour. Neighborhood vs. neighbourhood. We’re speaking the same language. Yet until certain words come up, you wouldn’t know which side of the pond they were written on. Why do these differences exist when we’re all English speakers? As if this elusive language didn’t have enough exceptions and nuances to confuse us.

We’ve discussed some of the differences between common US/Canadian spelling distinctions, but let’s talk about why that’s the case. We’ll end off with which one is ultimately better (you can probably guess what our stance is).

Before any standardization of spelling was made official, the spelling of some of these words was fairly loose and interchangeable. That is, until 1755 when Samuel Johnson wrote “A Dictionary of the English Language” to solidify the British (and Canadian) way of doing things. Nearly a decade later, Americans started to follow Noah Webster’s “An American Dictionary of the English Language” in 1828. After the birth of the published documents that wrote the law on language, these distinctions became more widely separated.

Many of the -our/-or spelling distinctions, for example, originate from old French spelling where the U is predominantly used and from Latin where the U is dropped. Webster was more of a stickler for standardizing and following rules, which is why he dropped all the Us in American English. Johnson, on the other hand, cared more for what made the most sense for each given word, whether the origin was Latin or French. And that brings us to our last point.

Based solely on the principle of what came first (almost 100 years sooner, to be exact), Canadian English is the winner in our books. It also greatly outnumbers US English usage (which is limited only to the US), whereas all other English-speaking countries use the better version. Canadian English is in favour of pronunciation, therein adding a level of ease to this already complex language. And finally, it considers what makes the most sense for each word, not discriminating against origin (much like the multicultural country itself).

So no matter how much red underlining we see under our colourful French ancestors, we’ll always be in favour of the better spelling.